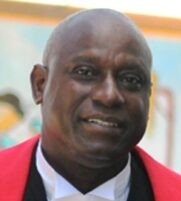 Justice Courtney Abel, a retired judge of the Belizean Supreme Court, says Guyana’s quest to establish itself as an arbitration centre for the Caribbean could dramatically transform its economy.
Justice Abel told a webinar on Tuesday, that he has witnessed how the service industries can dramatically transform economies through arbitration.
“I am saying that with the Government’s support and with the support of the Bar Association, the Supreme Court and the people, this system of arbitration will be the means by which the economy is transformed,” he told the webinar.

“Guyana – the next arbitration hub: The journey begins” – the webinar’s theme, was a joint venture by the Attorney General’s Chambers and the Guyana Bar Association
The Guyanese-born jurist explained that arbitration is a special kind of legal arrangement, which forms part of alternative dispute resolution or a way to resolve disputes outside the courts.
In the process of arbitration, one or more persons decide the resolution, which renders the ‘arbitration award.’ An arbitration award is legally binding on both sides and enforceable in the courts.
As such, Justice Abel noted Guyana’s recent ascent to a major oil-producing nation, is among the reasons that the new dispute resolution process could be beneficial to Guyana.

He said disputes arise frequently in the oil sector, and will undoubtedly surface in Guyana.
“Disputes in oil and gas amount to very large numbers and they are expected to grow. They are between commercial companies, investors and states, and between states. The subject matters include different issues including contracts, national statutes, international treaties, et cetera. The issues raised are all complicated and highly specialised,” he noted.

Attorney General (AG) and Minister of Legal Affairs, Anil Nandlall S.C, had announced that Guyana is pursuing a model that could see it becoming the hub of arbitration in the Caribbean and Latin America. He explained that the process would involve the modernization of Guyana’s Arbitration Act, to address both domestic and international arbitration.

The AG said as Guyana emerges as a petroleum nation; it will attract a host of multinational companies. Therefore, he stressed, the country has to prepare its legal architecture to accommodate the new influx of investors. During the seminar, Nandlall said that the intention is to first build a foundation.
“Right now, we are examining the arbitration architecture to make it modern and there is a model legislation promulgated in the world and we are in the process of adjusting it to meet Guyana’s expectations and to also link it to the Judiciary, while at the same time having arbitration as a process available to the parties outside of the legal system, if it does not wish to go into the formal legal system,” he said.

As it stands, the AG noted that in every contract, particularly those with the oil and gas companies there are arbitration clauses, which mean that the matter will have to go to arbitration, and Guyana not having an adequate arbitration will delay the dispute process.
“In the contracts now, they say that if there is a dispute between the parties including the Government of Guyana, they have to go to Brussels or London or New York or Texas to resolve these disputes. We can resolve them right here by arbitration once we put the requisite mechanisms in place and the statutory framework in place that is modern and responsive as those in the destinations chosen by these contracts,” the AG had explained.

Nandlall noted, too, arbitration is just one of the means of alternative procedures to the Courts. As such, he disclosed that work is also underway to upgrade the local mediation process.
Guyana’s arbitration structure is over five decades old, archaic and cannot meet the demands of new and dynamic industries. As a consequence, the AG Chambers has been seeking to review the international treaty arrangements related to arbitration, and develop and upgrade the local laws, rules, practices and cultures relative to arbitration.
It is also looking to develop training protocols and programmes to establish and maintain international standards of best arbitration practices and cultivate confidence in international investors that the country is a competent, gold standard arbitration venue.