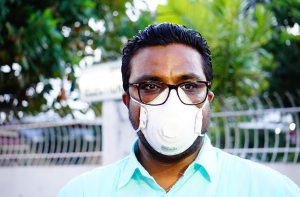 Sase Gunraj, Commissioner of the Guyana Elections Commission (GECOM), in response to a call by trade union leader Lincoln Lewis for the March 02 elections to be cancelled has said the President “has no power to cancel this or any other elections.”

The results of the elections show the PPP as the clear winner. The Coalition lost the elections by over 24,000 votes but refuses to give up power and has used various manoeuvres to the Court to try to get GECOM to use figures, which have been confirmed by the recount as fraudulent, in order to retain the seat of government.

Guyana faces crippling sanctions and will be isolated by the international community if the results from the national vote recount are not announced.

Lewis, who was a candidate for President David Granger’s APNU+AFC Coalition, has urged the President to resist the recount if he cannot be declared the winner. He adds to a small group of PNC hardliners who want to see Granger continue in office despite the results of the recount and the clear ruling of the highest court Guyana subscribes to – the Caribbean Court of Justice (CCJ).

Recently, former PNC Prime Minister Hamilton Green called on the President to put aside the constitution and the law. He later said it was a slip of the tongue.

Gunraj said the recount exercise was not Granger’s recount but one that was commissioned, executed and concluded by GECOM, acting pursuant to decisions of GECOM.

The genesis of the recount was to solve the quagmire which resulted from the illegalities committed by District Four Returning Officer Clairmont Mingo in his two declarations.

“In addition, the intent of the recount and the ambit thereof had to be and was in fact governed by law and as a consequence, the outcome and results of the recount are in keeping with the law,” Gunraj stated in a post on his Facebook page.

More importantly, Gunraj stated, the conduct and outcome of the recount have been judicially pronounced upon by the highest court, that is the CCJ which has ruled in favour of the recount and has notably struck down the use of the fraudulent results by Lowenfield.

“Therefore, Lewis is attempting to mislead and confuse the public by advocating positions that have no basis in law and by arrogating power unto Granger which he does not have.

“Finally, only a court can cancel an election and its results in an elections petition and no other way,” Gunraj stated.

The world’s leading international organisations including CARICOM, the OAS, the Commonwealth and Guyana’ major development partners the USA, the UK, Canada and the European Union, have all called for the declaration of the results of the elections on the basis of the results of the national vote recount.

Granger has on multiple occasions said he would respect whatever declaration is made by GECOM and has also repeatedly said he is not interfering in the work of GECOM.