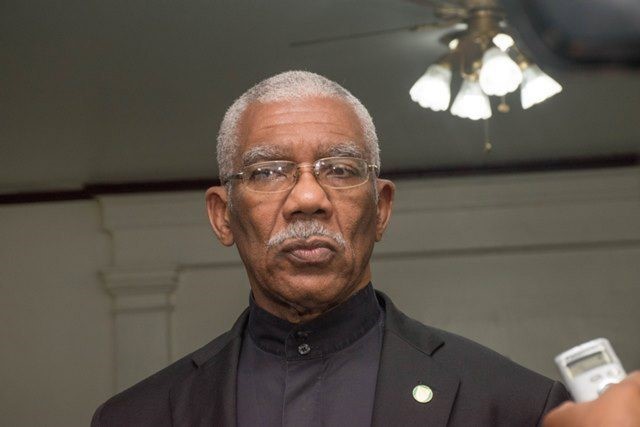 Former Presidential candidate of the A Partnership for National Unity +Alliance for Change (APNU+AFC) party, David Granger, has indicated by way of notice to the Court that he will not oppose the Elections Petitions, which challenges the results of the March 2, 2020, Regional and General Elections.
According to a Notice seen by Kaieteur News, the move is in keeping with provisions of Section 27(1) (a) and (2) of the National Assembly (Validity of Elections) Act Cap1:04 and rule 25 of the National Assembly (Validity of Elections) Rule Cap1:04; provisions which cater for withdrawal from the proceeding.
Section 27(1) (a) of the Act states, “that if before the trial of an elections a respondent other than the Chief Elections Officer (CEO) gives the prescribed motive that he does not intend to oppose the petition… the Registrar shall give notice thereof in the prescribed manner …”

Part Two (2) of the section further notes that, “a respondent who has given the prescribed notice that he does not intend to oppose the petition or for whom any person has been substituted shall not be allowed to appear or act as a party against the petition in any proceedings thereon.”
The notice comes days after the lawyers embroiled in the case argued of an application to have Granger struck from the list of respondents in the matter.

During the proceedings, Attorney Mayo Robertson, who represents one of the petitioners in the matter, held the view that Granger is not a necessary part in the case and should be struck off.
Robertson’s contention followed an application by Attorney General (AG), Anil Nandlall, to have the entire election petition case quashed based on the fact that service of the case to both Granger and People’s Progressive Party/Civic (PPP/C) Bharrat Jagdeo was defective.
Lead Attorney for Jagdeo, Douglas Mendes S.C, argued however that the issues are bound up together and should be ventilated together.

“If the court decides that Mr. Granger is not a necessary party, then he will be struck out only from the proceedings but if the court decides that he is a necessary party, then the entire petition will need to be struck out…” he said.
The AG had previously filed an application for the dismissal of the petitions on the grounds that the matter was filed outside the timeline prescribed by the law for legal service on the parties involved.
According to the AG, the respondents were served in breach of Section II of the National Assembly (Validity of Elections) Act, Chapter 1:04 and Rule Nine of the National Assembly (Validity of Elections) rules.

In his application, the AG noted the documents were served on Granger four days outside the statutorily prescribed period.
He stated that the Affidavit in Support of Service of the petition filed by Brennan Joette and Natasha Nurse shows the acknowledgment of service signed by David Granger on September 25, 2020, when it should’ve been served by September 20, 2020.
“In those circumstances,” Nandlall asserted that, “the Court cannot proceed to hear the petition.”