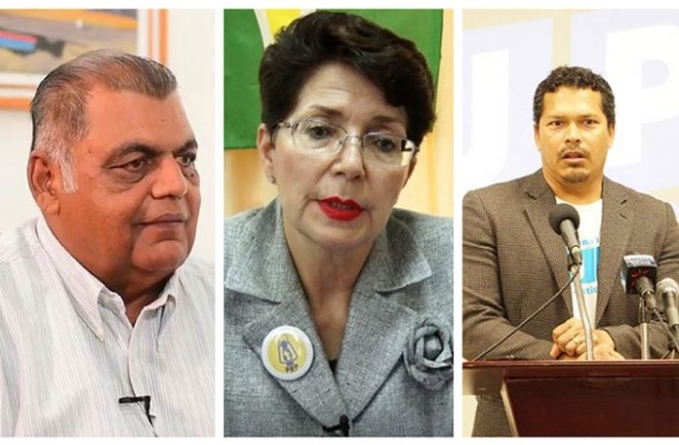 ALTHOUGH political candidates named for removal from their parties lists due to false declarations on Nomination Day have been writing the Guyana Elections Commission (GECOM) to argue their case, GECOM’s decision to omit them remains final.

“There isn’t any way that any change could be made to the decisions that the commission made in respect of their removal,” Commissioner Robeson Benn said firmly on Tuesday, explaining: “They were dual citizens on the day that they handed in their declarations on Nomination Day.”

Meanwhile Commissioner Vincent Alexander stated, “They have been writing trying to argue their case but, as it is, on the face of their matter, they’re not eligible and their matters have been forwarded for the people who look after infringements to take a position on that.”

The three had signed Statutory Declaration Forms as candidates in contest of the upcoming General and Regional Elections, but possessed dual citizenship at time. To be signatory to the form while a dual citizen is in breach of Articles 53 and 155 of the Constitution and makes a person liable to imprisonment for one year according to the Statutory Declaration Act, Chapter 5:09.

Only on Sunday, Dr. Leung put forward the argument to the newspaper that, having signed the declaration renouncing her Canadian citizenship on January 8, 2020 – two days before Nomination Day – she was no longer a citizen of Canada as of that date. However, the renunciation of one’s Canadian citizenship follows a process and must be approved by the Canadian Embassy by means of a certificate of renunciation which Dr. Leung did not possess at the time.

Along with other legal arguments, she told the newspaper that should GECOM choose not to reinstate her as a candidate on her party’s list, she would take the matter to the court. “That’s a legal argument,” Alexander said. “That’s for the law to decide. As far as we’re concerned, we have a declaration in front of us and based on that declaration there was no document coming from the people who had to renounce their citizenship saying it had been renounced.” Meanwhile, Commissioner Benn said, “that is what she says but the position remains the same; it still remains that she was a dual citizen on the date that the declaration was made.”