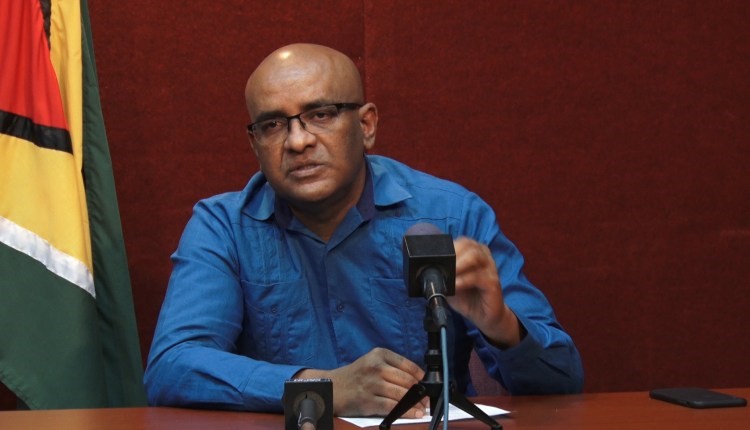 The recount of all the votes cast that was supposed to start on Monday has been delayed, first by the Guyana Elections Commission (GECOM) insisting that an agreement be signed for the Caribbean Community (Caricom) to supervise the process, then by the Ministry of Public Health showing up to fumigate the location for “ants.”

Party agents refused to leave the location for the recount, the Arthur Chung Convention Centre (ACCC), since they were keeping watch on the containers containing ballot boxes. This led to them being threatened with arrest by Riot Police who were called to the scene.

At an emergency press conference on Monday night, Opposition Leader Bharrat Jagdeo slammed the attempts being made to frustrate the agreement he along with President David Granger reached with Caricom.
Jagdeo made it clear that as leaders with authority, both Granger and GECOM Chair Claudette Singh could have intervened to stop their underlings from causing confusion. Thus, he noted that Granger and Singh are ultimately responsible.
According to Jagdeo, GECOM Deputy Chief Elections Officer (DCEO) Roxanne Myers arrived at the Centre and informed GECOM Commissioner Robeson Benn that he could not keep watch over the containers. According to him, GECOM is set on moving persons away from the ballot boxes.

He was suspicious that this was part of a plan to prevent the recount from happening. He noted that the Public Health Ministry, led by People’s National Congress (PNC) Chairperson Volda Lawrence, has been seeking to frustrate the process.
“Roxanne Myers showed up and said to Robeson Benn, a Commissioner of GECOM who is appointed in accordance with the Constitution of Guyana, that he cannot watch the containers that have been moved to the Convention Centre. Imagine the CEO, the same one who was fraudulently appointed, saying to a Commissioner of GECOM that he can’t watch the containers.”

“They know that the moment the recount is done in Region Four, that the truth about the fraudulent acts would be revealed. So many are fighting to prevent that from happening. That’s why you see the frustration of the Caricom agreement.”

Jagdeo pointed to what happened on Saturday, when Chief Justice (ag) Roxane George was forced to use Diamond Magistrate’s Court to hear a case brought by the PPP to secure a recount because the High Court was being fumigated that very day.

Jagdeo was suspicious that this was all part of a plot to tamper with the ballots, which are locked away in the containers. According to him, his party will nevertheless maintain a vigil outside the Centre.
When it comes to the Memorandum of Understanding (MoU), GECOM announced on Monday that a MoU would have to be signed between Granger, Jagdeo and Caricom officials in order for the recount to take place under their supervision. Jagdeo made it clear that he has no problem with signing the agreement.

“I went up to Caricom earlier and I reviewed the MoU that was submitted to me yesterday, the draft MoU. And I said I don’t have an issue with it. I spoke to the Prime Minister and the Secretary General,” Jagdeo said.
“She’s going to call me back to tell me whether there has been any progress on the other side to conclude this MoU. I’ll get in touch with you as to the situation with the MoU, which I don’t have a problem with and I would willingly sign. We’re just awaiting word from the Prime Minister on that.”

This publication had visited the Centre on Monday morning, where we were informed that the Centre was inspected by GECOM and other stakeholders. It was also explained that arrangements for using the venue were being finalised. GECOM Commissioner Robeson Benn had been hopeful that the recount would start at 13:00h.