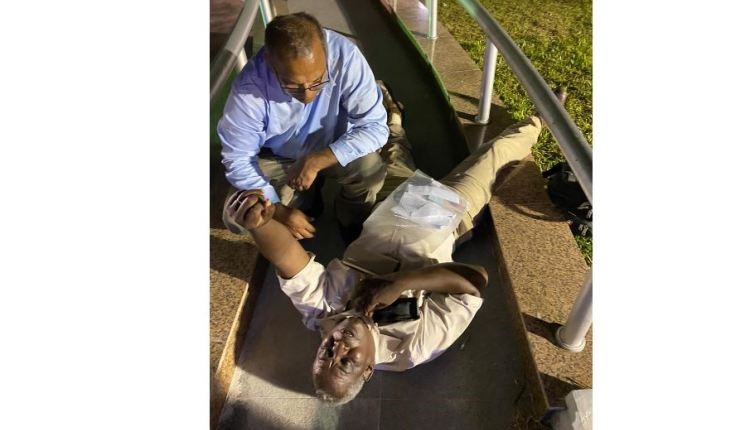 Commissioner of the Guyana Elections Commission (GECOM) Robeson Benn says he was assaulted by ranks of the Guyana Police Force whom he claimed literally dragged him out of the Arthur Chung Conference Centre Monday night.

Ranks from the riot squad threatened to arrest representatives of the political parties and observers at the Arthur Chung Conference Centre where the national recount of votes from the March 2 polls is scheduled to take place.

Benn, who is a PPP nominated Commissioner, was repeatedly asked by Police Officers to leave but he refused to do so and photos of him lying on the floor of a ramp leading to the building were later circulated.

He told reporters that the Police Officers “laid hands on me and tried to physically remove me from the position. I held onto the rails and they dragged me along the ground to a point where I was lying on the ground. They said they were going to get a shield to put me on it and physically refuse me.”

As a result, the Commissioner said he suffered injuries to his arm. He said he would visit a doctor to assess his injuries.

“My problem is I have a problem in my shoulder now from the elbow going up, some muscular or tendon problem as a result of the issues with the Police,” Benn told reporters outside the Conference Centre.

He defended his decision not to leave the compound noting that as a Commissioner, he has the authority to stay inside and given the concerns relating to the security of the ballot boxes, he was not prepared to move.

“I said to them you can arrest me or do whatever you want with me but I was not leaving on my own volition given the issues relating to these ballot boxes.”

A member from each political party that contested the election was eventually allowed to re-enter the compound of the Arthur Chung Conference Centre where several containers with ballot boxes are located.