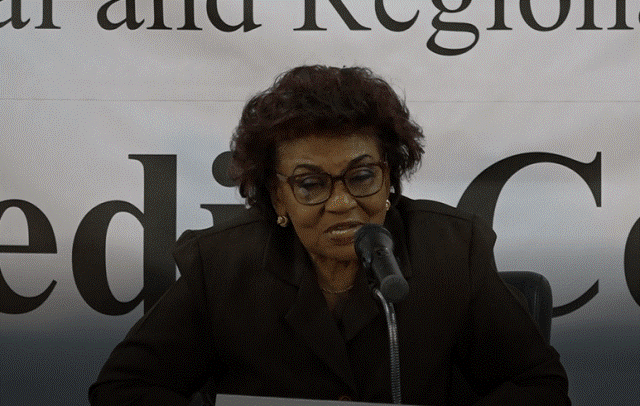 Chairperson of the Guyana Elections Commission Justice Claudette Singh moments ago suspended the tabulation process of the votes for District Four (Demerara-Mahaica) to seek clarity on the Chief Justice Roxane George’s ruling.

Representatives of political parties were at odds with the Returning Officer Clairmont Mingo this morning when he attempted to use a spreadsheet to do the count for Region Four.

“To arrive at these spreadsheets, I took each Statements of Poll, inputted into our computer, tabulated it and come up with these sheets for each polling station,” Mingo added.

A party representative then asked, “How can we verify what you’ve inputted in those SOPs is the correct figures?”

Mingo replied by saying that “If it does not follow, then there is a course of action which is specified in the law you may follow.”

Observers and party representatives continued to protest the use of the spreadsheet.

Thereafter, the GECOM Chairperson arrived and addressed the gathering where she subsequently suspended the process to seek clarity.

The Chief Justice yesterday ruled that RO did not compile the tabulation of the majority of the SOPs in a transparent manner to ensure accountability in front of the statutorily authorised stakeholders.

In her ruling, she urged that the new process be done in a transparent manner so as to restore confidence in the electoral process.