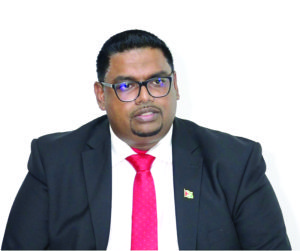 Presidential Candidate of the People’s Progressive Party/Civic (PPP/C), Irfaan Ali said that if all parties stay true to their commitment for a national recount then it would resolve the current electoral situation that Guyana finds itself in today.

Ali’s comment came following the various rulings from the High Court on Friday. Justice Franklyn Holder ruled that the court has jurisdiction to hear the legal proceedings filed by APNU/AFC candidate, Ulita Moore, that blocks the Guyana Elections Commission (GECOM) from conducting the national recount that was requested by President David Granger and agreed to by Opposition Leader Bharrat Jagdeo under the supervision of Caricom.

The High Court Judge also denied an application made for GECOM to submit the Statements of Poll from Region Four (Demerara-Mahaica), where the tabulation process has been mired in controversy and fraud. This resulted in calls by most of the parties that contested the March 2 elections – as well as from both local and international observers, and the international community – for all votes to be accurately counted.

But according to Ali, while many have claimed that they will adhere to the rule of law and uphold the Constitution, this cannot be done if they do not first adhere to the will of the people and do right by the will of people, which was exercised almost four weeks ago.

“Today, we continue to battle to secure our democracy and to have your votes counted to ensure that the votes of District Four reflect correctly the will of the people… Now, this issue can be simply resolved by doing what all of us would have committed to doing, that is, the national recount. Rather than exposing our country, rather than exposing our democracy, rather than having the state of affairs in our country today where not only the business community [but] every citizen is uneased,” the PPP/C Presidential Candidate noted.

Ali, who has an economic background, further stated that the country’s system is collapsing with its international reverses plunging downwards and gold reserves deteriorating.

On this note, he posited that all Guyanese have a responsibility now to speak up and ensure that the country proceeds on a pathway that is democratic and stable.
“What is happening now is going to drive investments away from us. What is happening now is leading to a lot of distrust in our country as a whole, not only our political system but our country as [a] whole. When the democratic rights of people is eroded, it’s the strongest signal of a failed state that any country can send to investors. We don’t need this at this time,” he asserted.

The PPP/C Presidential Candidate referenced a recent statement made by APNU/AFC campaign manager, Joseph Harmon, for political parties to “sit and work out our differences”.
But Ali posited that before this is done, there needs to be a commitment to move the process forward through a democratic pathway, whereby the people’s votes must be respected and their fundamental right of electing a Government of their choice is protected.

“You must ensure that that process is completed. We must ensure that a democratic elected Government, based on the will of the people, is sworn into office,” he added.
Nevertheless, Ali further added that there is a lot on the agenda that the leaders have to talk about in moving Guyana forward.

He noted that greater inclusiveness, greater participation, constitutional reform – were all things that the PPP/C spoke about on the campaign trail while noting that the conversation on these and other matters cannot commence from an illegal platform.

“We cannot commence the conversation from a platform of mistrust and distrust. We have to commence the conversation on a platform of fairness, dignity, honesty and respect for the will of the people. And that platform requires us to do the right thing – have the recount, declare the true results and have a Government of the people’s choice, assume office so that together, we can take our country forward. Together, we can rebuild our international image and together, we can send a strong signal internationally that Guyana is ready to stand up, protect and safeguard its democratic principles,” he contended.

In urging Guyanese to play their part to ensure this, the PPP/C Presidential Candidate also urged the international community to continue to press forward and assist local efforts that seek to protect Guyana’s current fragile environment.