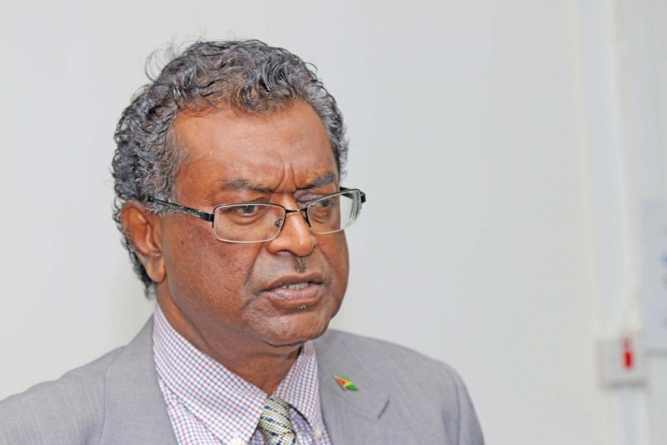 The Public Security Ministry under the former APNU/AFC Government spent over $600 million in 2019 to procure office furniture and other equipment for various branches of law enforcement. However, the Audit Office has made a number of unsettling discoveries, ranging from millions being unaccounted for to old and rusty furniture being procured using taxpayers’ money.

According to Auditor General Deodat Sharma in his 2019 Audit report, the now renamed Public Security Ministry spent $349.5 million to purchase these items. This included $302.6 million to purchase tools and other equipment for the Guyana Prison Service, and $249.4 million to purchase communication, musical and other equipment for the Guyana Police Force.
A further $42.9 million was spent on the Guyana Fire Service and $14.1 million on the Customs Anti-Narcotics Unit (CANU). But when the Auditor General examined 123 payment vouchers totalling $315.8 million, over $200 million of the purchases could not be accounted for, due to lack of documentation.
“Audit examinations of 123 payment vouchers totalling $315.864 million in respect of equipment and furniture purchased revealed that 56 of the payment vouchers, totalling $202.616 million had no stores documentation. In this circumstance, it could not be determined whether the items purchased were delivered,” the Auditor General said, to which the Ministry offered no explanation for the whereabouts of the items.

No records
When it comes to the Guyana Fire Service, the Auditor General revealed that a physical inspection was carried out at nine fire stations, and it was found that no records were maintained to account for the assets they procured.
He also recounted that, during the inspection, a station officer denied receiving said assets. But when the Auditor General was eventually shown the assets by the same officer, assets that were purchased last year, it was to see that the assets included rusty old steel chairs and a cabinet that had seen better days.
Another issue encountered by the Auditor General is the purchase of items for the Guyana Police Force that were not marked as property of the Force and, as such, the Public Security Ministry breached Section 28 of the Stores Regulations.

“Amounts totalling $255 million were budgeted for the purchase of arms and ammunition, fingerprint, ballistic, photographic, handwriting, communication, narcotics, intelligence, traffic, crime scene, musical equipment and furniture and equipment,” the Auditor General wrote.
“A physical verification of capital purchases valuing $132.4 million revealed that the items purchased for 2019 could not be verified, since they were not marked as property of the Force,” the report also said.
Again, no explanation was offered by the Ministry, save to assure that efforts would be made to ensure the capital items are marked to make them identifiable.
But even worse, $39.1 million was spent to purchase capital items for the Force in 2019 that up to the time of reporting had still not been delivered.

It is a similar situation from prior years, as $6.9 million in items are also outstanding from 2017. The Auditor General has urged the Ministry, which has since reverted to the Home Affairs Ministry, to comply with the Stores Regulations and to follow up with suppliers to have outstanding items from prior years delivered.
Meanwhile, amounts totalling $140 million were spent to purchase items for the Guyana Prison Service, including cables, phones, shredders, fax machines, cartridges, batons and riot shields. According to the Auditor General, however, those items are yet to be delivered.
Again, no explanation was given, and the Auditor General has urged the Ministry to follow up with the suppliers.