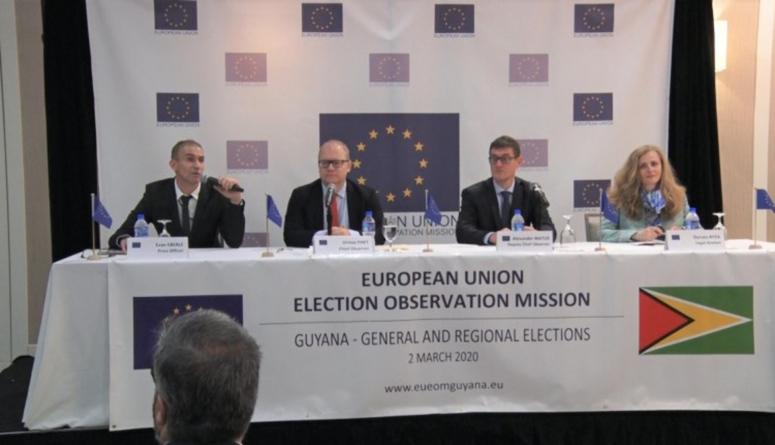 The European Union (EU) Election Observation Mission has written to the Returning Officer of Region Four, Clairmont Mingo asking to see the Statements of Poll that he used to prepare a spreadsheet of results which is intended to be utilised  for the declaration of results for Demerara-Mahaica.

The EU observer mission letter signifies the growing concerns among observers about the manner in which the process for Region Four has gone.

The letter of today’s date to Mingo signed by Deputy Chief Observer Alexander Matus said that the request was being made pursuant to Section 4 (1) and (3) of the general Elections (Observers) Act, as well as section 6,7, 8 and 9 of the Administrative Arrangement between the Delegation of the European Union in Guyana and GECOM.

Matus wrote “I am hereby requesting to examine the Statements of Polls based on which you have prepared the spreadsheet of results before the ascertainment of results for Region Four is completed”.

Chief Justice Roxane George-Wiltshire yesterday ordered that the tabulation process for Region Four resume. When it did, Mingo presented a spreadsheet which had earlier caused controversy. The process has since been suspended until tomorrow.

The EU fielded an observer mission of over 50 persons.