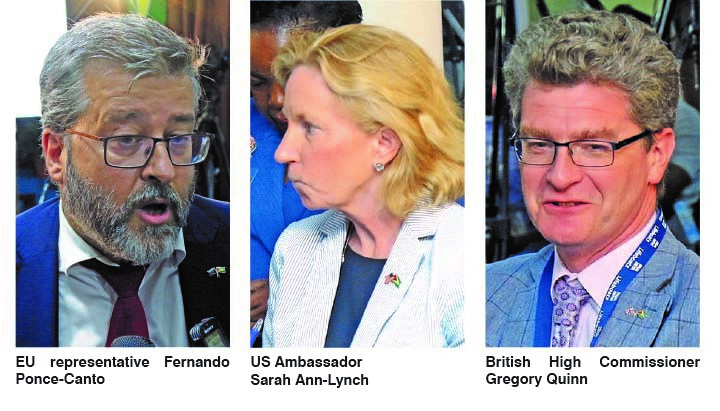 Diplomats from the ABE countries, that is to say, the United States (US), United Kingdom and the European Union have expressed confidence in the voting process during E-Day on Monday, making it clear that they have observed no cases of rigging.

The diplomats were at the time speaking on the sidelines of a press conference called to announce preliminary results on Tuesday. According to British High Commissioner Gregory Quinn, all that is now required is for the Guyanese people to wait patiently for the results.

“I think the important thing, of course, is that GECOM makes sure the result is announced. So, we have to let GECOM do what GECOM needs to do… I was here in 2015, this is my second election. The process is slow because of the checks and balances that go into it. I fully understand why things are slow. We want results as quickly as possible, but of course, we want credible and accurate results,” Quinn said.

“Everywhere we went yesterday (Monday), the process worked exactly as it should work. The procedures were there. For example, whenever people turned up without a voter ID card, the procedures meant to be followed were followed. So based on everything we saw, albeit from a small sample of polling stations, everything was fine,” Quinn added when asked.

In her comments, US Ambassador Sarah Ann-Lynch noted that having visited polling stations in Bartica, Skeldon, Linden, New Amsterdam and Georgetown, she observed a smooth process. According to the Ambassador, she is now looking forward to hearing about the final results, as well as continued peace in the city.

“We look forward to hearing about the final tabulation and the continued peace in the city… I did [observe], I was out in the city, to a couple polling stations in Essequibo, in Bartica, in Linden, Skeldon, I was in a number of places in Rose Hall and New Amsterdam and I’m finished in Georgetown.”

“In each case, things were well run and very smooth. So, it’s really a great achievement and a great success, we think. My message is just to wait and hear the tabulation of the results and when the Guyanese people have spoken, to accept those results. We look forward to continued good hours and days ahead.”

Accept results
Meanwhile, European Union (EU) representative Fernando Ponce-Canto went further by seeking to urge whichever political party may be on the losing side, to accept the results when they are declared.
“We are very satisfied in terms of the peace of the process. The process has been peaceful. That is something very important. Most of the citizens of Guyana considered yesterday a celebration of democracy.”

“Having said this, it’s important to add that the winner, whoever it is, should form a Government as soon as possible. And the loser, whoever it is, accepts the results and the whole country unites to ensure they can profit and benefit from the future.”
Asked directly if there were any cases of rigging, Ponce-Canto referred the media to the EU observers led by Estonian politician Urmas Paet. The diplomat also noted that the European Union stands ready to work along with whoever forms the next Government.

“Whatever the result, we will be very happy to work with whatever Government Guyana decides to give to itself. And we will be happy to cooperate with Guyana. We have a very strong, longstanding partnership and we are looking forward to a stronger one,” he also said.