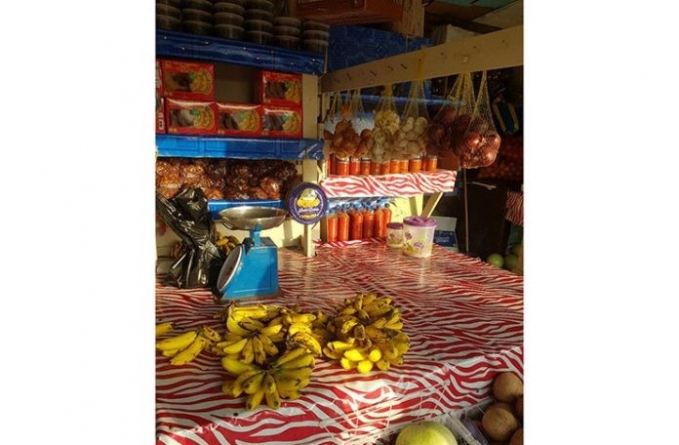 While Linden remains very peaceful, with no reports of election-related violence, commercial activities in the town have been affected by the elections aftermath, as several business owners decided to either shut shop or change their operating hours to an earlier time.

Residents of Linden are complaining that some items cannot be sourced in stores and this is because trucks supplying these retail and wholesale businesses are not making frequent trips to the mining town. This has forced many business owners to travel to Georgetown in search of items to sell. It was not a successful journey for some, since many supply stores in Georgetown have shut their doors. One grocery seller said she was currently selling from old stocks as most of the suppliers have not come to Linden, since the elections, for her to restock. She remains anxious about the situation and is afraid to travel to Georgetown as some vendors have done.

During a walk-about in Mackenzie Market on Tuesday, this newspaper observed quite a few shops locked, and those that were opened were closing very early. One of the three fruit vendors on the Mackenzie Park was closed, while another had very limited stocks, compared to any normal day. Customers have also complained about the increase in prices for some fruits and vegetables.

What is of concern to many residents is the availability of agricultural produce in the mining town since it is heavily dependent on other regions.
“I am very concerned… trucks already not coming up, people hardly buying, this has been my slowest week for the year, so far,” said market vendor, Hildi Sampson.

Regional Agricultural Officer, Derrick Collins, encouraged the residents to not get too despondent over the situation relative to the limited agricultural produce coming to the region, but to use this time to support the local farmers as they have been making significant strides to increase their production for times like these. Many residents, he said, are focusing on retail sellers who are dependent on produce from the out-of-town trucks but there are many local farmers who can supply the town at times. The Regional Democratic Council, he said, has been working assiduously with local farmers to increase production in the region and there has been an increase, particularly with exotic crops such as cauliflower, broccoli, spinach, carrots etc.

“We are encouraging residents to support the local farmers; we still have farmers producing and coming out that can even sell to retail farmers on the market so I don’t foresee a problem in Linden where we might not get food and this is when farmers should be encouraged to go back to the land and plant,” Collins said. The RDC had made agriculture a programme head following the 2005 floods on the East Coast which caused major food shortage in Region 10.

In the 2020 budget, he said the RDC will be investing a substantial amount of money in agriculture which will see significant support being given to agricultural communities. Already for 2019, the region has embarked on multiple agricultural projects, the big ticket one being a farm to market road. With these projects, the region is expected to reduce its dependency on outside food markets by 40 per cent by 2022. In addition to this farm-to-market road, farmers have been exposed to climate-smart training aimed at combating extreme weather patterns and climate change. Fourteen shade houses were established, seven of which were in secondary schools across the region, in an effort to encourage agriculture at the school level. The agriculture department is also pushing for more farmers to access agricultural loans in the region through small business financial institutions such as the Linden Enterprise Network and commercial banks.