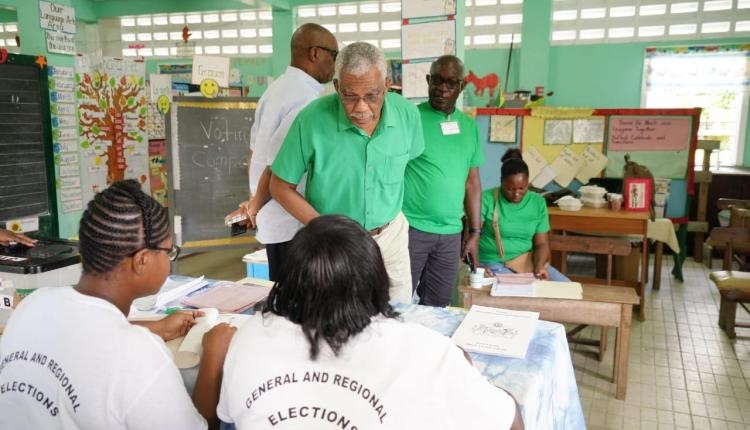 Incumbent President and Leader of the APNU+AFC Coalition, David Granger voted at the general and regional elections Monday morning along with First Lady, Sandra Granger at the Pearl Nursery School, East Bank Demerara.

Granger said his voting process was “smooth and successful” as he expressed confidence in the ability of the Guyana Elections Commission (GECOM) to conduct the elections efficiently.

“I am very confident, the coalition which I lead will be successful. I am confident also that the process which has been put in place by the Elections Commission under the chairmanship of Justice Claudette Singh will be efficient,” Granger told reporters.

The incumbent President urged Guyanese to exercise their democratic right to vote.

“I expect we will have a smooth and successful process. This is not only a democratic right but a democratic duty of all citizens to participate in this process.

“I would urge persons who might be a bit tardy to rethink the prospect of ensuring that they get a government of their choice in Guyana so I hope people don’t stay away regardless of their political persuasion, they should come out and express their opinion in favour of the party of their choice.”

Granger noted that Guyana is on show for the international observers and community to demonstrate it is capable to conduct the elections in a credible manner.

“The observers are in the country from all around the world and Guyana today will demonstrate that it’s a democratic country and it is capable of conducting elections efficiently and credibly in accordance with the law and the constitution.”