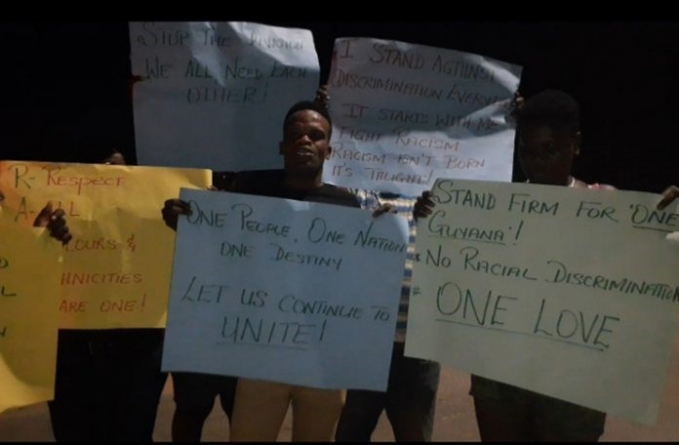 While they were small in number, their message was heard loud and clear as they walked through the streets of Victoria and other neighbouring communities.
Following the aftermath of the March 2, 2020 elections and ensuing racial tension, a group of young enthusiasts on Sunday organised a small march through several communities to promote unity.

Chanting “One People, One Nation, One Destiny”, and “We’re stronger together; no time for hate”, the group was led by Javon Charles, a young Victoria resident who organised the march. The purpose of the simple yet significant event, he said, was to send a humble message to all Guyanese to say, “End racism, and do not be provoked by the current political season.”

One particular voice which was louder than all the others was that of Michael Spencer, an activist in Victoria Village, who also stated that the sole of purpose of hosting the march was to send a message to persons who would have been spewing hate and promoting racism during this sensitive and critical time in Guyana.

“We are accustomed to love, peace, unity and harmony, and today we are saying ‘Say no to racism’,” Spencer said.
Another young man by the name of Marlon Gillis noted that he joined his fellow villagers to promote love, and stomp out racism.

As citizens grew frustrated and impatient, given the delay in the declaration of the results, the outcome of the said riots has left several young children bruised and traumatised, as well as several members of the Guyana Police Force injured and hospitalized. The unfortunate events have also left a family mourning the death of their 18-year-old loved one.