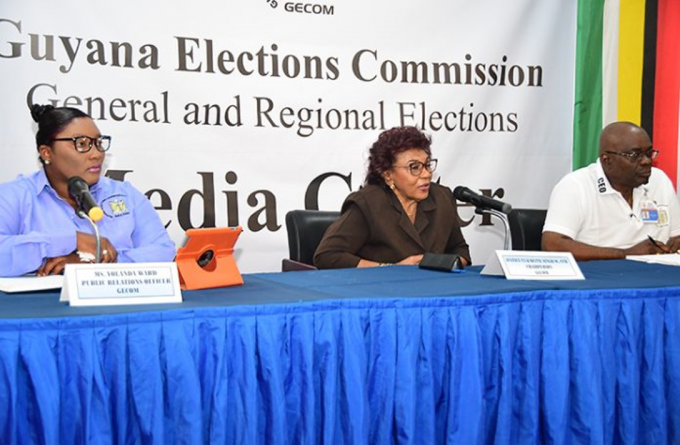 Chief Elections Officer (CEO) of the Guyana Elections Commission (GECOM) Keith Lowenfield has made it clear that the official results of the elections must be declared by the GECOM, and that persons should not look for that information in any other place.

Lowenfield was at the time responding to questions about rumours of the election results circulating social media. The question was raised by Trinidadian journalist Andy Johnson at GECOM‘s midday post-elections press briefing yesterday.
Johnson spoke of claims heard by some in Trinidad that the PPP/C had won the elections. According to the reporter, some Trinidadians are already in celebratory mode on the basis of information circulated on social media that the PPP had secured victory.

“They are already celebrating and sending congratulatory messages. There are numbers that have circulated saying that the PPP/C has won the elections and people are heralding the new President. How do you respond to that?”
In response, Lowenfield iterated that GECOM is the only entity authorized to declare the results.
According to the CEO, GECOM is not even at the stage where declarations are made from districts to the Returning Officers (ROs).

“I think I was very pellucid before that we aren’t even at that stage where we have the declarations by districts by the respective ROs. Therefore, there is no declaration by the Chief Elections Officer (CEO) of the results of the elections for 2020.”

“Even if a media house has gone through the process of obtaining results by polling stations and does their own calculation, they would arrive at unofficially who would have won and who would have lost. But as far as GECOM is concerned, we have not yet arrived at that stage at this moment.”

At the press conference yesterday, it was the first instance that GECOM released any preliminary results, as the online portal provided previously by GECOM failed to work. Those results only accounted for 139 out of 2,339 polling stations. They could not have been, by any stretch of the imagination, indicative of the national situation.
It was only until later in the afternoon that the portal started to work and showed few updates as statements of poll were verified by GECOM.

However, the CEO noted that it would take a while for GECOM to completely tabulate all the results. He had previously said that he expected the returning officers for each district to have already declared the district’s results by noon. That was not the case.

GECOM Chair, Justice (ret’d) Claudette Singh, also addressed the gathering at the press conference, asking the public to be patient and to allow GECOM to do its work.
At the point in time that the press conference was held, GECOM had already collected most of the statements of poll from around the country, save for some situated in remote areas, like some parts of Region Eight.
While GECOM did have a majority of the statements of poll, Lowenfield explained that it is important for the documents to pass through an administrative process meant to verify their accuracy, and to ensure that the election results are beyond reproach.

Unfortunately, in the meantime, fake and/or sensationalized news has festered on social media platforms.
Fake news has been circulating on Facebook, for instance, in abundance. Late yesterday, GECOM released a statement advising the public to be aware of a fake Facebook page, purporting to be that of the Commission.
The page, going under the alias ‘Guyanas Election Commissions’ “has been releasing inaccurate information with an intent to cause mischief and confusion,” GECOM stated.

GECOM stressed that persons must be “alert and ignore all such content.”
All official updates will be posted on GECOM’s official page.
The GECOM’s official website, www.guyanaelections.com is where all updates pertaining to the recently held General and Regional elections can be found.