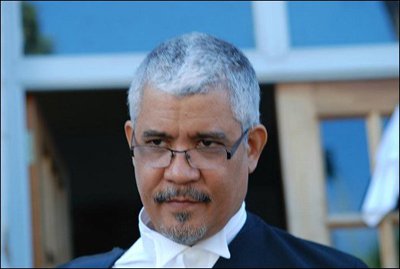 The Court of Appeal was on Saturday told that with its narrow jurisdiction, it can intervene only in the ongoing electoral process, to ensure that it is completed; and in this case, that would include compelling Chief Elections Officer Keith Lowenfield to adhere to the directions of the Guyana Elections Commission (GECOM) to use the figures from the National Recount to present his Elections Report.

This submission was made by Senior Counsel Douglas Mendes during the virtual hearing of arguments in the matter challenging Chief Justice (ag) Roxane George’s recent decision that results from the National Recount must be used as the basis for a final declaration of the March 2 elections’ results.

Lowenfield has consistently failed to comply with the instructions of the GECOM Chair, Retired Justice Claudette Singh, and on several occasions, went ahead to present fraudulent figures to the Elections Commission.
During Saturday’s hearing, SC Mendes, who is representing PPP Presidential Candidate Dr Irfaan Ali and General Secretary Bharrat Jagdeo, argued that the court can intervene at this stage only to resolve the current impasse between GECOM and the CEO.

“The High Court does have the jurisdiction to make such orders as may be necessary to resolve that impasse…[But] You are allowed to intervene in order to ensure that the process is completed; and in the circumstances of this case, the only intervention that you can make is to require Mr. Lowenfield to comply with GECOM’s direction to prepare his report in accordance with the Recount. That is the only basis upon which you can intervene,” Mendes stated in response to questions posed by Appellate Justice Dawn Gregory.
Justice Gregory and her Appeal Court colleague Justice Rishi Persaud, together with High Court Justice Priya Sewnarine-Beharry, are presiding over the case.

The Trinidadian Senior Counsel pointed out the various laws governing the conduct of elections in Guyana, and specifically referred to the Elections Law (Amendment) Act which, at Section 18, says the CEO “…shall…be subject to the direction and control of the Commission”.

He contended that, at this time, the appellant cannot seek any relief on GECOM’s functions, since it is precluded by Section 140 of the Representation of the People’s Act (RPA), which prohibits any review of the performance of GECOM’s functions except on an election petition, which can only be filed after a declaration is made.
According to SC Mendes, Section 140 does not apply to the CEO, because he is not a member of GECOM, and therefore the court can intervene on that “limited basis” to direct him to complete the process by complying with GECOM’s order.

Premature
On this note, the Senior Counsel went on to submit that any question regarding the validity of the conduct of the election ought to, and must, be dealt with by way of an elections petition.
Mendes further argued that the appellant’s challenges to the Recount Order (or Order 60, under which the National Recount was conducted) cannot be dealt with at this stage of the electoral process.
“Questions of constitutionality and the legality of the Recount must be taken up by an elections petition. The (electoral) process must be allowed to be completed…otherwise there will be undue disruption in the process as we go along. We must get to an end of the process, and if parties are unhappy with the results, they can take it up by way of an elections petition,” he asserted.

The Trinidadian SC noted that it is not unusual that elections are determined while there are allegations that the laws are unconstitutional. He cited Gladys Petrie -v- AG (1968) and Seecomar Singh and Another v RC Butler (1973), where this had happened.
“The legal system did not crash. Democracy did not suffer, because it is an important principle of elections law that you allow the elections to be completed, and any question of invalidity you take up afterwards in an elections petition,” he contended.

Addressing the issue of res judicata, SC Mendes noted that the Appeal Court had previously, in the Ulita Moore case, clearly determined the court’s jurisdiction. He said this applies frontally to this current appeal. In the Moore case, the Appeal Court had declared the law; that is, the reach and ambit of Section 140, which he submitted that, like any declaration or interpretation of the law or the constitution, binds everyone.

“It is not a question of res judicata as much as it’s a question of stare decisis; this is judicial precedence. This is part of the laws of Guyana until that law is overturned by a higher court, and all courts must abide by it, including this court, because the rule is the Court of Appeal in civil matters is bound by its own decisions until those decisions are overturned by the higher court,” Mendes outlined.

However, in an opposing position, Senior Counsel John Jeremie, who is leading the appellant’s legal team, contended that for the High Court to say that res judicata applies in this matter is to defy the established principles.
Jeremie argued that Order 60 is invalid, and that its provisions are in conflict with Section 162 (1) of Constitution, which details the powers given to GECOM.
He posited that GECOM cannot be given the power to overturn the results of the initial declarations already made by the 10 Returning Officers.

In her ruling on Monday, Chief Justice George dismissed the application filed by Misegna Jones and ruled that the only data that could be used for the declarations of the March 2 elections would have to be the Recount results.
She also set aside the 10 declarations made by the Returning Officers. Jones is now challenging this decision.
Following Saturday’s hearing of submissions, the Appeal Court is expected to deliver its ruling on Thursday, July 30.