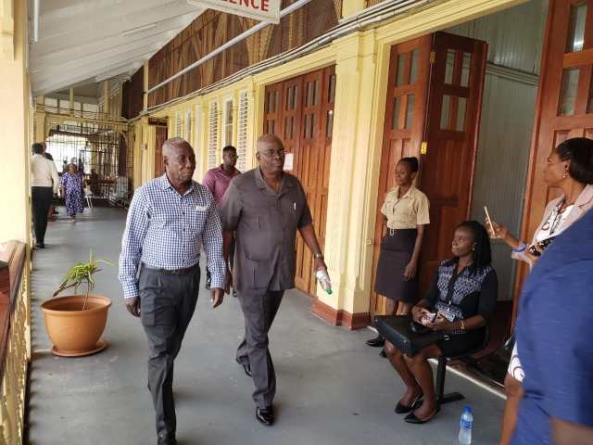 Chief Elections Officer, Keith Lowenfield has hinted to the Chairman of the Guyana Elections Commission (GECOM), Retired Justice Claudette Singh that the 10 district declarations might have to be used to declare final results of the March 2, 2020 general and regional elections.

Lowenfield did not submit a  report on Friday, contrary to Singh’s request, but instead responded to her missive.

Noting that Wednesday’s decision by the Caribbean Court of Justice (CCJ) nullifies a section of the recount order, he went on to cite a section of that judgement that refers to the declaration of results by Returning Officers. He noted that the recount did not provide for a role for statutory officers.

“Kindly provide guidance on which results of the 2 March, 2020 elections could be lawfully declared,”Lowenfield told Singh.

The 10 district declarations have not been nullified and have been held in abeyance. They include the controversial Region Four results that altogether gave David Granger’s A Partnership for National Unity+Alliance For Change (APNU+AFC) victory. The recount figures show that Region Four was bloated in favour of the coalition while all other declarations generally matched the recounted and certified figures.

The Chief Elections Officer asked the Chairman to “provide guidance” on how the Representationof the People Act would be operationalize because the wkectionkaw says votes counted and information furnished would be provided by statutory Officers” and “allocation of seats is premised on the statutory report of the Returning Officers.”

He highlighted that the CCJ “clearly stated” in its judgment that it is the Returning Officers who are required to count the votes and furnish information.

“The concluding opinion of the CCJ judgement states that Order No. 60 is in tension with the Constitution of Guyana and could not create a new election regime,” the Chief Election Officer told the GECOM Chairman.

The Recount Order Number 60 provides for the Commissionto first decide on whether the recount data should be used by the Chief Election Officer to declare results under the Representation of the People Act.

The Chief Elections Officer also appeared to object to the Chairman asking him to submit a report based on the certified recounted votes on the basis that he legally is subjected to the direction of the Commission under the Election Laws Act. He asked her if the Commission was instructing him based on that law or Guyana’s constiution. “The historic practice of submission of the election report to the Chairman has been premised on ascertainment of the result by the Chief Election Officer,” he said. “The structure of your missive suggests a change in operational procedure and further the two (legal) citations appear dissimilar,” he added.

Meanwhile, police have cordoned off streets around the headquarters of the Guyana Elections Commission on High and Cowan Streets, Kingston. Pro-coalition supporters are standing behind police barricades two blocks away at Main and New Market Streets near State House.0