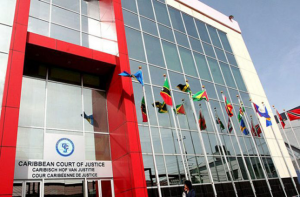 Attorney-at-Law Kashir Khan has asserted that Article 4 (3) of the Caribbean Court of Justice Act does not prohibit the court from having jurisdiction in the case and its presence in the law has, in fact, been misconstrued, misinterpreted and twisted.
Khan made this pronouncement last week, when the CCJ held its hearing into the appeal of Mohammed Ifraan Ali et al v Eslyn David et al ruling.
During the hearing, Khan read Section 4 (3) of the Act, which has been used by coalition lawyers to argue that the CCJ has no jurisdiction to reopen the case.

“I will recite it because I believe it requires some distillation. It says, nothing in this act shall confer jurisdiction on the court, meaning CCJ, to hear matters in relation to any decision of the Court of Appeal, which at the time of entry into force of this act, was declared to be final by any law.”

Khan pointed to the use of the word “was” in the Act, which refers to the past tense prior to 2005. According to him, it cannot, therefore, refer to present day and the Court of Appeal ruling which was made last month.
According to Khan, who represents Shazaam Ally and Abedin Ali, who are joint parties to the proceedings, this provision refers to the period of 1971 to 2005, when Guyana cut ties with the Privy Council. It was necessary to ensure that cases decided on during this period, were preserved from the CCJ’s jurisdiction as Guyana’s apex court.

“I’m suggesting to the court that you have to look at 4 (3) as merely preserving the jurisprudence that accrued between 1971 and 2005. Section 4 (3) has no ambulatory effect. It cannot oust this court from having a review of the decision that took place in 2020,” he said.
“Any decision of the Court of Appeal that came after 2005, is open to review. There is no finality. The word was is past tense. It was intended to preserve the jurisprudence of 1971 to 2005, nothing more.”

Khan also supported arguments that the Eslyn David case preempted the natural course of events and thus, could not be applicable to Article 177 (4) of the Constitution of Guyana. According to him, the Representation of the People Act sets out a clear pathway before a President can be deemed to be elected.
He said that instead, David approached the court seeking an interpretation of the law and a Guyana Elections Commission (GECOM) order when the relevant situation being contested, the election of the President, has not even happened yet. And in such an event, the correct format for such challenges is through an elections petition.

“There has been no declaration, no extraction, the entire construct of the Representation of the People’s Act is such that that process is a necessary step towards getting to the point where somebody gets elected,” Khan declared.
The CCJ is expected to render its judgement in the case, which was filed by People’s Progressive Party (PPP) Presidential Candidate Dr Irfaan Ali and General Secretary Bharrat Jagdeo, on Wednesday. Ahead of the decision, however, there have been advertisements, articles and even protests which seek to reinforce the view that the CCJ does not have jurisdiction.