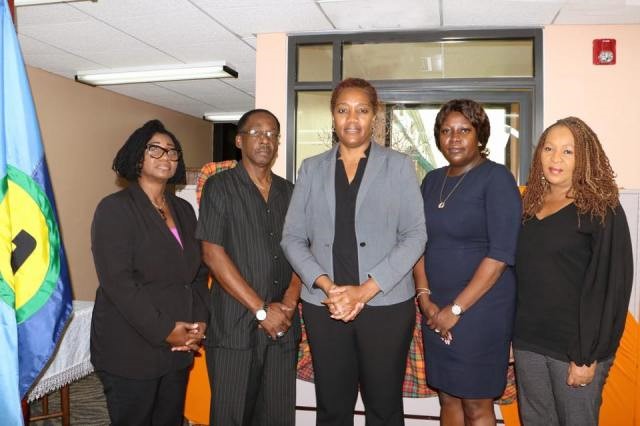 The CARICOM high-level team that was due to oversee a recount of votes cast at the March 2 elections has decided to call it quits and will today depart Guyana as a court order today blocked the Guyana Elections Commission (GECOM) from proceeding although both President David Granger and Opposition Leader Bharrat Jagdeo agreed to the process, sources this afternoon confirmed.

High Court judge Justice Franklyn Holder today granted interim injunctions based on an application by Ulita Moore that effectively prevents GECOM from permitting a recount based on the agreement between Granger and Jagdeo, until an application for judicial review is determined.

Moore is a regional candidate for the incumbent APNU+AFC. She is being represented by attorneys Mayo Robertson and Roger Yearwood.

The recount of all ballots cast during the polls was expected to begin yesterday under the supervision of the High Level team–comprising  Angela Taylor, Chief Electoral Officer, Barbados; Anthony Boatswain, former Finance Minister, Grenada; Francine Baron, Chair of the Team and former Attorney General and Foreign Minister, Dominica; Fern Nacis-Scope, Chief Elections Officer, Trinidad and Tobago; Cynthia Barrow-Giles, Senior Lecturer, Department of Government, UWI–from the Caribbean Community (CARICOM), but the process has been stalled over questions surrounding the legality of the process.

GECOM earlier today said it was examining the legal ramifications of the agreement between Granger and Jagdeo in accordance with the Constitution of Guyana. “While the Commission has considered the proposal and has implemented systems for the operationalization of the exercise; as a safeguard mechanism, it is necessary for all the legal issues to be properly addressed including the gazetting of the process as requested by the high level Caricom delegation. Once finalized, the counting would commence immediately.

“The outcome of the Commission’s decision in this regard would be communicated and adequate notice on the start time for the exercise would be provided”, GECOM said in a statement this afternoon.

Based on Moore’s application, the judge today granted an interim injunction restraining GECOM from setting aside or varying the Declarations of the Returning Officers for the 10 electoral districts or replacing the declarations until a hearing and determination of the judicial review application.

An interim injunction was also granted restraining the Chief Election Officer from submitting any report of the total votes cast for each candidates list except for those counted and furnished by the Returning Officers under Sectio n 84(1) of the Representation of the People Act.

The judge also granted interim injunctions specifically restraining GECOM, the Chairperson and the Chief Election Officer from permitting any persons to count or recount ballots based on the agreement between Granger and Jagdeo or GECOM and CARICOM until the hearing and determination of the judicial review application.

The recount had been agreed to by Granger and Jagdeo in wake of the controversy over the process used by Region Four Returning Officer Clairmont Mingo to declare results for Region Four, which has prompted allegations of electoral fraud. The results would give the incumbent APNU+AFC a victory at the polls and a one-seat parliamentary majority should they stand. A court last week invalidated Mingo’s initial purported declaration after finding it to be unlawful.