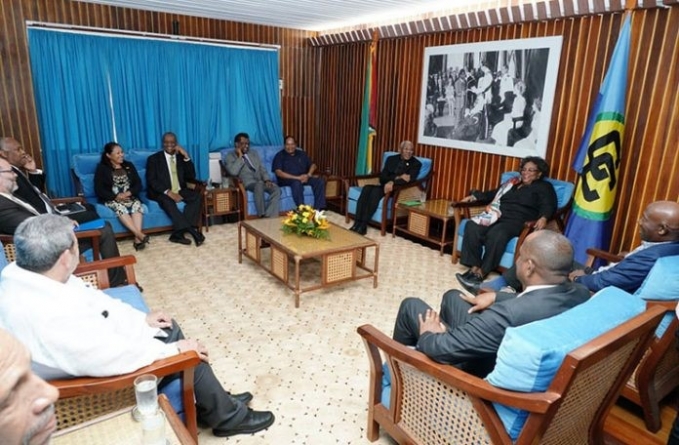 The delegation of CARICOM leaders which arrived in Guyana on Wednesday have met with President David Granger, members of the main opposition party and the heads of several small parties amidst concerns about the tension over the 2020 General and Regional Elections.

At the meeting at the Ministry of the Presidency (MOTP), President Granger told the leaders that he will continue to abide by the Constitution of Guyana, the ruling of the Supreme Court and the decision of the Guyana Elections Commission (GECOM). According to a release from the MOTP, the President said: “I am committed to the rule of law and the Constitution. We will abide by the declaration of the Elections Commission. Like all of Guyana, we are waiting for the declaration.”

He told the leaders that he considers Guyana a continental state with Caribbean characteristics and welcomed the presence of the five regional leaders. He also stated that he has always respected and will continue to respect the decisions of the Court. “We have respected the integrity and autonomous nature of the Elections Commission. We respect the Courts, as independent from the Executive and will abide by the decisions of the Court,” the President assured the Caribbean leaders.

In return, Prime Minister Mottley said the regional leaders have travelled to Guyana to find an amicable solution to the challenges facing the country’s leaders. She said that it is undesirable to see the loss of life, injury, and damage to property. “We are conscious that the court has ruled and that the process [validation] has to be continued. We [Caribbean leaders] do not want to see the loss of life, damage to property or injuries,” Mottley said with the full agreement of the other leaders.

President Granger was accompanied by Prime Minister Moses Nagamootoo; Vice-President and Minister of Public Security, Khemraj Ramjattan; Director General, Ministry of the Presidency, Joseph Harmon and Minister of State, Dawn Hastings-Williams. At around 18:00hrs yesterday, the delegation arrived at the Leader of the Opposition on Church Street where they met with People’s Progressive Party/Civic (PPP/C) General Secretary, Bharrat Jagdeo and other party executives such as Anil Nandlall, Gail Teixeira and Juan Edghill.

Exiting the building, Prime Minister Mitchell said that the talks were progressing well. “We’re getting some progress,” he said. They then left to meet with the leaders of several small parties in Guyana.

Today, they will brief the media on their two-day visitation at the CARICOM Secretariat Headquarters in Georgetown. Mottley, has stated on a previous occasion that the community stands ready to facilitate dialogue between Guyana’s main political leaders and take other necessary actions to aid in the process.