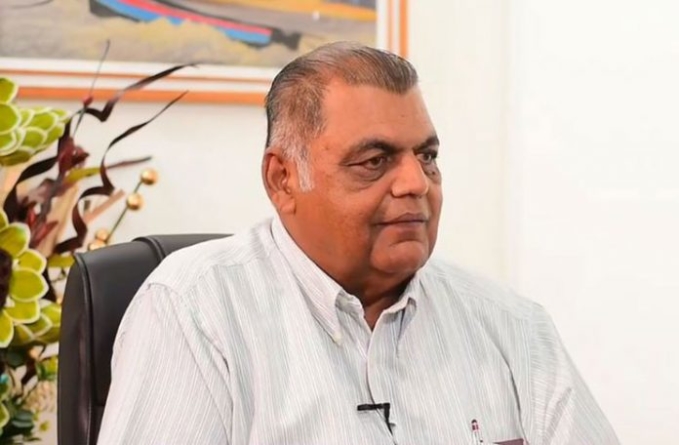 Presidential Candidate of the United Republican Party (URP), Dr. Vishnu Bandhu is no longer a citizen of the United States of America (U.S.A). His foreign status was relinquished on January 16, 2020, paving the way for him to contest the March 2 General and Regional Elections without fear of contradiction or breach of the Constitution of Guyana.
Article 155 of the Constitution of Guyana prohibits Members of Parliament from being dual citizens. Ahead of elections for the 65 seats in the National Assembly, candidates are mandated to sign a Statutory Declaration Form, declaring among other things, that they are not citizens of another state – a requirement set out by Article 155.

Though on Nomination Day (January 10, 2020), Bandhu had signed the Statutory Declaration Form, while he was still a citizen of the U.S, he, in a letter, informed the Guyana Elections Commission (GECOM) of his intentions to renounce his foreign status.
According to documents seen by Guyana Chronicle, the URP’s Presidential Candidate was issued with a ‘Certificate of Loss of Nationality of the United States’ on January 16, 2020, by the U.S State Department – Bureau of Consular Affairs. In an interview with Guyana Chronicle, Dr. Bandhu rebuffed claims that he had “bowed out” of the electoral race due to him being a dual citizen. It was the People’s Progressive Party/Civic (PPP/C) nominated Elections Commissioner, Sase Gunraj, who, on January 14, 2020, had informed the press that Dr. Bandhu had withdrawn from the electoral race due to his foreign status. “He [Dr. Bandhu] has indicated a desire to withdraw from the process as a candidate. He sent a letter to the commission,” Gunraj told reporters at the close of a GECOM Statutory meeting.
But the URP Presidential Candidate said no such letter was issued to the Elections Commission. He explained that in the interest of transparency, he informed GECOM of his status and willingness to renounce it. Referencing to a letter issued by GECOM, Dr. Bandhu pointed out that the same day, Gunraj, a sitting Elections Commissioner, misinformed the press, he (Dr. Bandhu) was issued with a letter indicating that his Lists of Candidates were satisfactory.

In a letter addressed to Dr. Bandhu by the Chief Elections Officer (CEO), Keith Lowenfield on January 14, 2020, the URP was informed that corrections to its Lists of Candidates were satisfactory. “The corrections to the defects submitted by you were satisfactorily corrected and you are hereby notified that your submissions of List of Candidates and List of Signatories for the National Top-Up, Geographical Constituency with an exception of Region N#8 and Regional in all Districts have satisfied the requirements set out in Sections 11, 11A and 11B of the Representation of the People Act Chap 1:03,” the letter read.

Another letter was dispatched to Dr. Bandhu on January 16, 2020 by GECOM. In that letter, GECOM said it was pleased to inform him that his List of Candidates bearing the title United Republican Party had been approved for participation in the General and Regional Elections set for March 2, 2020. For his dishonesty and scant regards for the rules set out by the Chairman of GECOM, Justice (Ret’d) Claudette Singh, the URP Presidential Candidate said Gunraj should be removed from his post. “Sase should be removed as a commissioner because he is not qualified to be there. The reason why he is not qualified is because he does not take instructions and does not go according to decisions of the Commission. He does what he feels to do,” Dr. Bandhu told Guyana Chronicle. He said all GECOM Commissioners should be impartial but, time and time again, Gunraj has failed to be neutral.

Dr. Bandhu said Gunraj has been peddling lies against the URP because the PPP/C is fearful that it could lose votes to his party. Unlike other small parties contesting the elections, the URP has been around for quite some time, founded in 1985 and launched in Guyana in 1987. In 1992 and 2015, the URP contested the General and Regional Elections but, according to Dr. Bandhu, the party only received 1,800 and 1,100 votes respectively. The URP is self-funded by Dr. Bandhu and he has vowed never to coalesce with the PPP/C despite the fact that Opposition Leader, Bharrat Jagdeo, had contacted him about same.