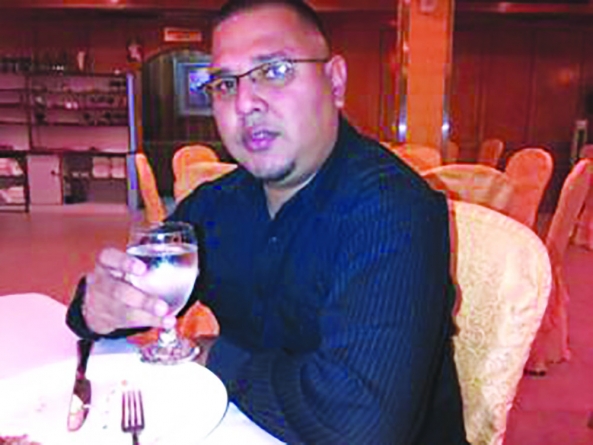 Avalon Jagnanan, who was the principal behind a company that received 15 acres of land from the National Industrial and Commercial Investments Limited (NICIL) under questionable circumstances, stands ready to cooperate with Police whenever he is called upon.

This is according to Jagnanan’s lawyer, Glenn Hanoman, who related that his client is ready and available and at home. He also said that when he reached out to the police after it was reported that he was being sought for questioning, the police informed them that they were not ready for him.
“They have his workplace and his phone numbers. They’ve never contacted him… he’s at home and he’s at work. He’s not hiding at all and the police don’t want to see him at this point. They say they might want to see him later. But not right now,” Hanoman informed this publication.
It was revealed last month that Life 1 Pharms Incorporated, which Jagnandan heads, leased a total of 15 acres of land at Peters Hall, East Bank Demerara (EBD), for the sum of US$11,700. This land was subsequently transferred to one individual for $100.

Similarly, A-Z Pharmaceuticals also leased three plots of land at Peters Hall for US$11,700 a year from NICIL. The company then transferred the land to the same individual for a mere $100. Police had detained and subsequently released Eddie Doolall, the principal for A-Z Pharmaceuticals, a few days ago.
The massive conspiracy to give away prime State lands by the A Partnership for National Unity/Alliance For Change (APNU/AFC) coalition, came to light late October with documents showing that People’s National Congress (PNC) member, James Bond collected US$1 million for lands at Peters Hall, East Bank Demerara.

Attorney General Anil Nandlall revealed that Bond, who was at the centre of the questionable transactions, was listed as the lawyer on record for the drafting of three contracts.
The AG revealed that in one instance, 20 acres of land was leased for 20 years to a company with its address listed as Third Street, Alberttown, Georgetown.
The lands referred to as Plots A1, A2, A3, and A4 amounted to 20.8 acres, which were not valuated prior to the signing of the lease on May 9, 2018, for an annual fee of US$16,224.
The land was later sold to a company connected to the oil and gas industry for US$1 million, which did not go to the owner, rather to the attorney on record.
Nandlall said that the address for the company is the same address that the PNC Executive has listed on his bank account as his place of residence.

Sub-leased for $100
The State Lands Act of Guyana stipulates that when State lands are leased, the lease must state that the lessee must not part with possession without the consent of the landlord (the State) or shall not assign the interest in the lease without the consent of the landlord. If the lessee acts in contravention of that clause, then the State reserves the right to step in and repossess the lands.
However, in the case of the three agreements at Peters Hall, the PNC Executive, in drafting the lease agreements, changed that to state: “the lessee may assign, sublet, grant any licenses or otherwise part with the possession and/or purpose and/or dispose of the whole or any part of the demised property or any building or other erection at any time standing thereon or any right or privilege in relations thereto conferred by this agreement.”

A total of 30 acres was leased, in 15-acre blocks, to two companies – Pharms Incorporated, and A-Z Pharmaceuticals – with both companies having identical leases for identical blocks of land at an identical rental fee of US$11,700 per year for an identical 20 years. Both leases were signed on the same date – May 17, 2018.
The Attorney General revealed that both companies, by way of Deed of Assignment, sub-leased the land to a Chinese national of Wellington Street, Georgetown, for just $100.

As of October 6, 2020, five companies had announced that they surrendered to the National Industrial and Commercial Investments Limited (NICIL), large tracts of land that were vested to them under controversial and non-transparent circumstances by NICIL and former Finance Minister, Winston Jordan.
The companies that have since reverted lands to the State are Navigant Builders Incorporated – the developers of Windsor Estates; Cardiology Services Incorporated; the Corum Group; American Marine Services Incorporated and Supergraphics Enterprise.
In all of those cases, the firms had expressed a desire to work with the new Administration to get the necessary approvals needed to pursue their respective developmental goals.