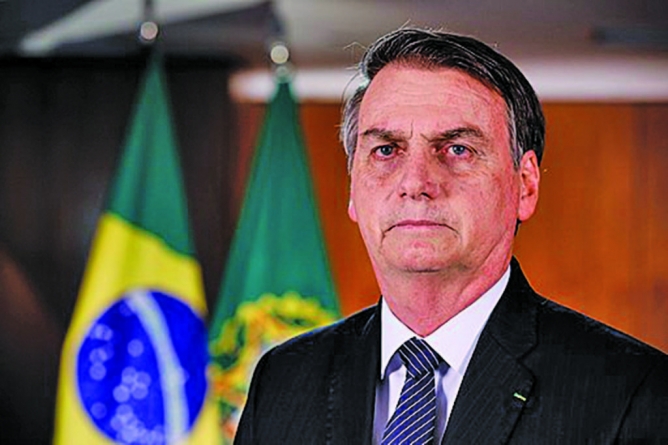 Continuing the trend of the flurry of overseas interest in Guyana, Brazil’s Foreign Minister Ernesto Araújo on Thursday paid a working visit to Guyana. And in the wake of meetings with top Government officials, it was decided that the two countries should increase collaboration in a number of areas.

Minister Araújo and team touched down in Guyana on Thursday morning, after which the members met with President Dr. Irfaan Ali and members of his cabinet, including Foreign Affairs Minister Hugh Todd, Attorney General Anil Nandlall, Public Infrastructure Minister Juan Edghill, and Home Affairs Minister Robeson Benn.
During the ensuing discussions, a review was done of all the existing joint partnerships between the two countries. One partnership that had been lagging was the Guyana-to-Brazil road link, for which the British had provided funding for the design.

The Linden-to-Lethem road, a key link between Guyana and Brazil, with the potential to boost trade, is at present little more than an unsurfaced trail that deteriorates in rainfall. As such, the United Kingdom Caribbean Infrastructure Fund (UKCIF) programme, administered through the CDB, was expected to provide funding for the first phase of the road, from Linden to Mabura Hill, as well as a crossing at Kurupukari.
The fund has in fact allocated a total of £53.2 million to Guyana to fund several projects, including the road.

With the 2018 no-confidence motion and the former Government’s delay in calling elections, these developmental projects were put on pause. But at Thursday’s meeting between the Guyana and Brazil delegations, it was agreed to resume discussions to complete the project and implement an International Road Transport Agreement. It was further agreed that discussions would be advanced for more collaboration in health, energy, security and trade.

For instance, it was agreed that there would be greater collaboration between health officials in both countries, aimed at tackling the COVID-19 pandemic.
In energy, the two sides agreed to advance discussions on energy cooperation, including environmental aspects, through the exchange of technical missions and information.
A number of agreements and Memorandums of Understanding (MOUs) were signed, including a MOU for a fibre-optic network from Brazil to Guyana. This agreement, the “Technical Feasibility Studies for the Installation of Optical Network from Boa Vista, Brazil to Georgetown, Guyana”, recognises the importance of establishing digital connectivity infrastructure between the two countries.
An agreement was also signed between Guyana’s Customs Anti-Narcotics Unit and Brazilian Police. This will go towards the fight against illicit activities and organised crime through the exchange of information and expertise.

When it comes to agriculture, it was agreed that the two countries would increase collaboration in the sector, including technical cooperation in pest and disease management. One example of this is the ongoing joint Carambola Fruit Fly (CFF) monitoring activities.
Meanwhile, Guyana and Brazil have also agreed that there would be more political coordination and talks on regional issues, and a technical committee meeting would be convened to discuss trade.
For instance, a Technical Committee Meeting under the Partial Scope Agreement will be convened with a view to expanding trade and investment. There will also be a meeting of the Guyana/Brazil Group on Consular Cooperation in January 2021.

It has, moreover, been revealed that the President of Brazil, HE Jair Bolsonaro, will be visiting Guyana next year. Bolsonaro, who was elected President of Brazil in 2018, was one of the many world leaders who had called on the former A Partnership for National Unity/Alliance For Change (APNU/AFC) Government to accept the election results.
Guyana and Brazil established diplomatic relations on August 26, 1968. Cooperation between the two countries covers a broad range of areas, including trade, health, agriculture, transport and security matters.
Already, President Ali has hosted a number of high-profile persons in Guyana, including incumbent United States (US) Secretary of State Mike Pompeo, Suriname President Chan Santokhi, and Sheikh Ahmed Dalmook Juma Al Maktoum of the United Arab Emirates (UAE).