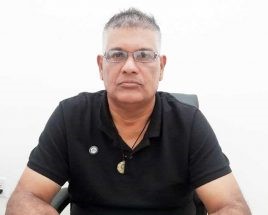 One of Berbice’s most well known faces of the Alliance For Change (AFC), the smaller faction of the Coalition, which was defeated in the recent elections, has resigned.
Yesterday, Gobin Harbhajan, the former Prime Minister’s Representative in Region Six during the APNU+AFC administration, made it clear that the party, in which he was a member for 15 years, has strayed from the values that were professed in the beginning.

“As a long standing member for the Alliance for Change since 2005,” wrote Harbhajan in his resignation letter, “I am grateful to the party for giving me the opportunity to serve the citizens of this country. Having served over the past five years, I am proud to have contributed my efforts to the growth and development especially in the administrative district of Region Six.”

Harbhajan, in the correspondence addressed to AFC’s General Secretary, David Patterson, pointed out that when the party successfully took office in 2015, he diligently served and supported the winning multi-ethnic coalition government to the best of his abilities. The letter was copied to Khemraj Ramjattan and Raphael Trotman but not Moses Nagamootoo.

“From the inception,” he wrote, “the goals, values and standards were very much appreciated, and for that I would cherish my experiences. I regret to say, however, that as time went by I no longer share the sentiments and views of the AFC.”
The official, whose name was suggested for the post of Region Six Chairman, said he was of the belief that the party was formed to serve the needs of the people.
However, “those things which were once valued by the members of the party no longer exists. Thus, with this formal letter of resignation, I bid farewell to Alliance For Change with immediate effect and wish the party the best in the future.”

He said that the party started to break its promises and there were differences of opinion: “Although we keep saying that the party was for the people, this all changed after 2015.”
According to Harbhajan, the poor showing at the Local Government Elections in 2018 in Berbice for the AFC was a clear indication that the party was not listening. The party received one seat in New Amsterdam and another at the Whim area.

There was a bitter fight between two of the party’s leader, Khemraj Ramjattan and Moses Nagamootoo. However, the straw that broke the camel’s back was at party’s conference in 2019, where Harbhajan contested to be re-elected to the party’s national executive.
He told reporters that he decided to leave when, “What I witnessed firsthand and how politics runs – it was strange to me.”

However, he held off as he was still serving as the PM’s representative. The official was critical of the nine parliamentary seats for the AFC, making it clear that it was “fortunate” that the party ended with that much.
Harbhajan said he had not yet considered his next move but insisted that he wanted to continue to serve the Berbice area.
“I have clashed with the executives of the party over the years,” he said, “because of the way things were being done. It is hard for new people to be welcomed into the leadership. The leaders only looked after themselves. I respect a few of the members.”