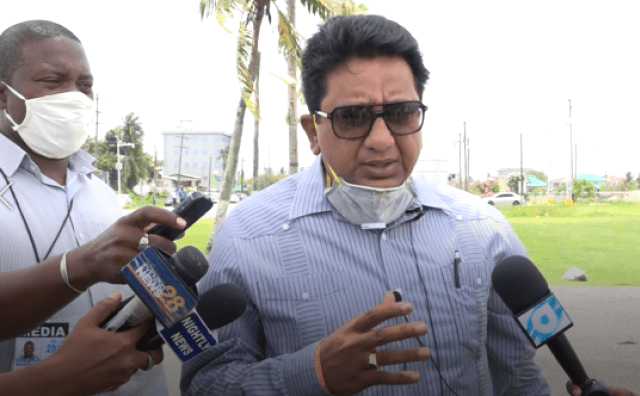 The $1.6 billion Ocean View Infectious Diseases Hospital deal entered into by the previous Granger led administration remains one of great concern for the new People’s Progressive Party Civic (PPP/C) government.
The deal, according to the Legal Affairs Minister and Attorney General, Anil Nandlall reeks of “illegality and conspiracy” between the owner Jacob Rambarran and the APNU+AFC and he added that the forensic auditors along with the Guyana Police Force (GPF) when called upon will have a gold mine within which to operate.
Nandlall said that while in opposition, the PPP/C strongly spoke out with concerns about the large sum being expended to refurbish the Ocean View Hotel despite it being deemed “an emergency”.
With the APNU+AFC operating in caretaker status, the deal caused much concern, as according to Nandlall, the money was used from the Consolidated Fund without any parliamentary oversight.
“That is clearly,” Nandlall said, “in violation of the Constitution and we said that from the beginning.”

He went on to question the soundness of such a hefty deal, whether the move was a reckless one by the former Finance Minister Winston Jordan.
“Would a competent Minister of Finance invest that kind of money in the circumstances on that property?” he asked, adding that such a question would have to be confronted at some point in time.
The AG stated that a number of factors need to be taken into account – whether $1.6 billion was a reasonable cost to expend on the old facility, whether the property was owned by the Government, and what did the money expended achieve.
For each of those questions, Minister Nandlall, continued, the key concern would have to be “would a prudent reasonable, competent Finance Minister preside over that kind of expenditure and authorize that kind of expenditure.”
“Speaking for myself, I don’t think so,” he said.
Nandlall was of the firm view that the project is tainted with “criminal recklessness and criminal negligence.” It was only after Government had already expended millions to commence on reconstruction did the rental agreement signed between owner, Rambarran and the Health Ministry come to the fore.
“A Minister of Finance like any other Minister,” Nandlall explained “owes a fiduciary duty to the taxpayers in relation to the expenditure of taxpayer funds. It is the same kind of responsibility that a director owes to a shareholder.”
The press had continuously questioned then Public Health Minister, Volda Lawrence along with the Finance Minister Winston Jordan and President David Granger on the deal but little detail was made public, outside of the cost. Yet, even that had several variations, with the project starting out at $250 million then moving to a $1 billion then finally, $1.6 billion cost just for rehabilitation. At the hastily put together launch of the facility, Lawrence had informed the media that properly outfitting the hospital would cost as much as three times the figure expended.
The APNU+AFC government had gazetted an acquisition order to compulsorily acquire the property. However, the owner – who was noticeably silent throughout the rehabilitation period –demanded that the new administration fork out $52 million in rental payments owed to him by the previous government and threatened to revoke his property if this was not done.
It was for these reasons that the AG also stated that, “From top to bottom, this deal smacks of illegality and conspiracy too.”
“You have that money being spent on private property,” he said “then you begin a process to compulsory acquire. You rent the man’s property and do not pay him rent and you are now purporting to buy the man’s property?”
Turning to Rambarran’s ultimatum, Nandlall questioned his role in the deal stating, “I don’t know what role this man is playing.”
He said, “He rent it first and then he go and get himself a valuation, never said a day that rent has not been paid for a whole year. Has now sent a letter asking for rent when the new government comes into power, you write to us? The whole transaction has to be forensically examined and appropriate action taken.”
The Vice President, Bharrat Jagdeo has already made it clear that Rambarran would have to wait a very long time before he would receive any funds from the new government.