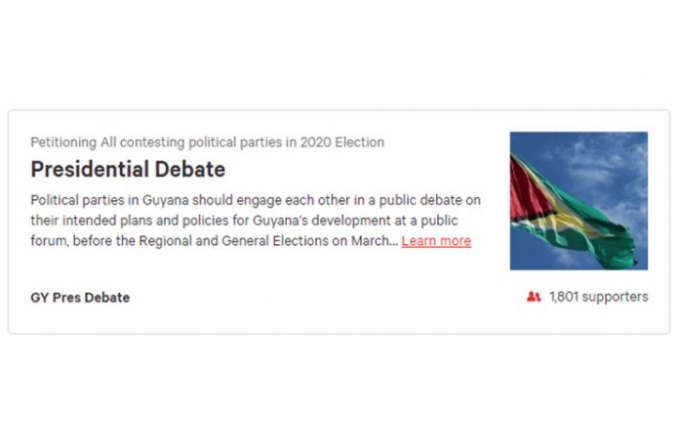 Young Guyanese are calling on political parties to agree to a public Presidential Candidates’ Debate before the March 2 General and Regional Elections, so that they can make informed decisions when casting their ballots.

Well-known youth advocate Dennis Glasgow is working to organise such a debate ahead of this year’s elections. According to him, his personal interest in a debate of this kind stems from his lack of knowledge of the candidates contesting and their positions on a myriad of issues.

Beyond himself though, the youth advocate said, “I want young people to get the opportunity to hear from these candidates and hear what they have to say from their hearts, not the big speeches they have prepared for them by their staff.”

He believes that young people, the largest voting demographic in Guyana, will be able to make an “informed decision” when casting their ballots, if they are engaged with politicians in a way that fosters an understanding of how they intend creating a brighter future for Guyanese youth.

While opining that young people have seemingly become disengaged from local politics due to the distrust of politicians, he urged that all Guyanese should consider developing a “new culture” whereby leaders are able to respectfully engage each other during this critical election period. In contrast to a political rally, he said that a public forum of this manner would allow the young people to speak with the politicians, instead of being spoken to.

“Rallies are important, but a more intimate conversation may be most effective for young voters since we get to hear directly from the candidates,” Glasgow said, reasoning: “A respectful debate will also give us a better opportunity to have a comparative assessment of what they all bring to the table.”

Glasgow also related that it is his understanding that there are quite a few other groups of young people who are working towards planning, or lobbying for, this debate. “I believe that we are stronger together and it’s important that we all collaborate on this initiative,” he said.

Adding to what Glasgow said was Shafeena Milton, who indicated that as a 20-year-old and a first-time voter, she is quite unaware of what many of the political parties are articulating as their plans for Guyana’s future.

“I thought having a presidential debate, in comparison to rallies or paid political ads, will allow voters to know more about candidates and their future agenda,” Milton said.

Milton along with her associates began an online petition- “GY Presidential Debate 2020”, to galvanise support around the lobbying efforts for the debate. When the Guyana Chronicle last checked on Sunday, this online petition had garnered just over 1800 signatures.

Moreover, a Facebook page was also created for this petition. And here, two of the smaller and new political parties, Change Guyana and The Citizenship Initiative (TCI) have indicated their willingness to participate in such a debate.

Further elaborating on her decision to help organise these lobbying efforts, Milton said she believes that as a candidate, literally, stands right next to their competitor at the debate, they would be compelled to present their best strategies for Guyana’s development. At the same time, this would allow all parties an equal chance to prove themselves and it would provide voters with greater insight into the respective candidates’ policies. 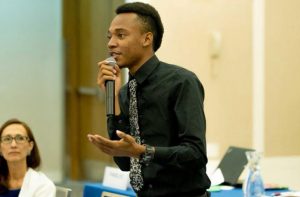 Through this debate, she said, “I hope that we can restore voters’ confidence… and so that when they do vote, they can have a sense of trust so that whatever the results of the elections may be, it will be for the benefit of the country.”

Speaking specifically on the willingness of the older, established parties to participate in such a debate, Glasgow highlighted that while they may be busy with nationwide campaigns, they should answer the call of young people just as seriously as they would from international organisations such as the United Nations, or otherwise.

“They may feel that because they are the oldest party, they have already cemented their support and need not grab at every opportunity to engage like the newer parties are doing,” he said.
“Every vote counts, and if the young people all across social media are asking for you to have a debate and live Question and Answer [segment] then indulge us. It’s an opportunity to win us over too.”

He also emphasised the need for these parties to endorse the Guyana Elections Commission (GECOM) Code of Conduct, cognisant that this youthful generation does not take lightly the use of racially insensitive and offensive elections rhetoric.
“So once they agree to invites [for the debate] then they need to ‘come correct’,” the young man said.