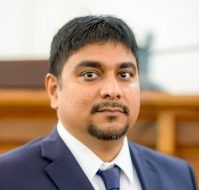 Pull quote: “If you aren’t allowed to have change because the electoral process is corrupted, then the mismanagement of the resources will simply continue.”

In his book, The Plundered Planet, economist Sir Paul Collier tells us that the corruption of an electoral process leads to worse economic policies. Interestingly, the Professor of Economics and Public Policy says that this is far more likely to happen in a society with an abundance of natural assets.

Seeing the state of affairs in Guyana, through the lens of the foregoing perspective, the tainted integrity of the electoral process is unequivocally, a heart-wrenching issue for Attorneys-at-Law, Timothy Jonas and Sanjeev Datadin. They both agree with Collier’s point on the far reaching effects of a corrupt electoral process which goes beyond the international sanctions that have been referred to on numerous occasions.

Speaking with Kaieteur News last evening, Jonas said, “The only reason you can even talk about such policies is if the government is answerable to the people. If it isn’t, then it can do whatever it wants, disastrous or not as it is secure in the knowledge that it will stay in government. That is why (the late Linden F.S) Burnham oversaw the destruction of the economy from 1970 to 1985.”

During the Burnham era, Jonas recalled that the former President banned flour and all imports. He reminded that while Guyana was rejected by institutions like the International Monetary Fund (IMF) and the World Bank, Burnham was able to remain in power thanks to electoral fraud. “So the worst harm that can happen to a country is electoral fraud because your leaders aren’t accountable to you anymore…They do not fear the people. And this has a wider picture that we have to pay attention to,” the lawyer contended.

Adding to his argument, Jonas who serves as Chairman of A New and United Guyana (ANUG), said that when the citizenry had enough of the People’s Progressive Party (PPP) and its corruption, despite having a larger ethnic support base, the PPP was voted out in a fair election. Jonas fears that this might never happen again. Now that the right of the people to discipline the government of the day is being trampled upon, Jonas said that the only next powerful recourse is the international community.

In sharing his perspective, PPP Candidate and Attorney-at-Law, Sanjeev Datadin stressed that an electoral process that does not give rise to leaders who reflect the will of the people is also a guaranteed incentive for those beneficiaries of a corrupt process to implement laws and policies that suit their interest.

Expounding further, Datadin said, “…There would be no incentive for that government to pursue programmes that have wide support, to implement laws and accept minimum standards, and guide how things are going to be done in the interest of the people because essentially, they wouldn’t care what the people think.”

The lawyer also posited that another challenge, which arises is that institutions with the capacity to formulate and introduce the best plans, frameworks and economic strategies would not want to be associated with the said government and importantly, that government would have no reason to engage such people.
In addition to this, Datadin argued that one of the dangers of having a government via a failed electoral process is that they become echo-chambers.

“Basically, you get surrounded by ‘Yes men’; you don’t get capable and educated people coming there because you have no incentive to pursue that. Echo-chambers are dangerous because essentially, an entire nation will become subjected to the limitations of the most powerful in the echo-chamber which would usually be the leader,” Datadin said.

Overall, he said that there would be no incentive to introduce laws for the benefit or betterment of the people. Instead, he opined that the nation would see laws, which concentrate power in the hands of the government. He said that doing this is tantamount to reducing the rights of the population. “That is what a failed electoral process will bring us,” the lawyer said.

HAPHAZARD & THOUGHTLESS
Datadin was keen to remind that on the 2015 election campaign trail, the Coalition Administration gave the people a solemn promise that it would rectify the ills that came with the PPP and within 100 days, it would achieve several goals.
“But this was not done. When they came in, Guyana had just discovered oil and from all that I, and other observers, have seen, they have successfully done more to undermine Guyana’s position of strength as well as the benefits we should have gotten from our petroleum resources and it was done in such a haphazard, thoughtless and purely simplistic way, that it is difficult to contemplate that there ever was a plan,” the PPP Candidate argued.

He added, “You couldn’t have a plan and end up with the results of where we are today. So the people in 2020 decided that they wanted better managers and that process is not being allowed to be transparent, fair and credible.”
Datadin argued that the failings of the APNU is the reason why the people want change and exercised their power to do so on March 2, last.

“But if you aren’t allowed to have change because the electoral process is corrupted, then the mismanagement of the resources will simply continue,” the lawyer concluded.