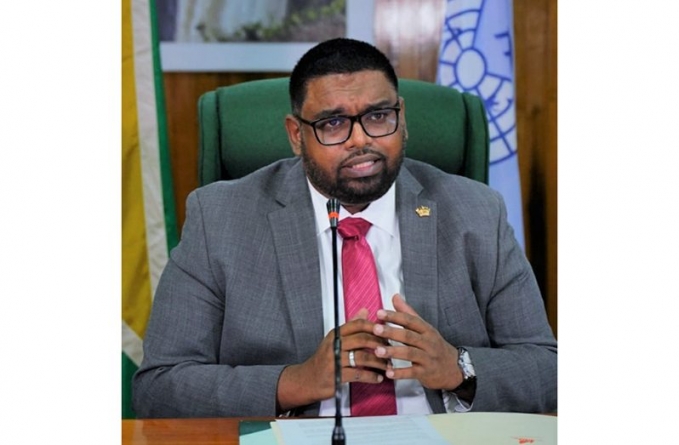 THE rebuilding of economies and the strengthening of public health systems, within the group, will depend, in large part, on their ability to work together towards developing and distributing COVID-19 vaccines as a global public good, said President Irfaan Ali.

The President offered these remarks during his address at the 44th annual meeting of the Ministers for Foreign Affairs of the Group of 77 and China, held virtually on Thursday.
He underscored that, if developing states are to recover from the debilitating and far-reaching effects of the novel coronavirus (COVID-19), it is imperative that they internalise the lessons of the pandemic and chart an inclusive, balanced and sustainable development path.

“This requires, fundamentally, for us to address issues such as development gaps and high indebtedness and to advocate for greater access to development financing,” said President Ali.
Speaking in his capacity as Chairman of the Group 77 and China, President Ali said that the long-term impact of the deadly pandemic will be felt more severely by the most vulnerable populations, including those from within the group’s member states made up of mainly developing nations. The pandemic has already begun to reverse and eliminate decades of developmental gains.

Guyana, like the rest of the world, has worked to formulate a response plan to the pandemic. The plan, according to President Ali, is driven by the need to ensure citizens’ health and safety while mitigating the pandemic’s debilitating economic damage.

Such objective, he explained, remained the central focus of his Government, and he believed it should be mirrored by other countries within in the group.
The pandemic has exacerbated existing structural problems and laid bare, the possibility of a further widening of the gap between the North and the South- a socio-economic and political division of Earth, popularised in the late 20th century and early 21st century.
“Our group has acknowledged the vital importance of multilateralism in finding solutions to the multiple crises which have bedeviled humanity. The efficacy of this mechanism cannot be under-emphasised at this time,” said President Ali.

INTERNATIONAL COOPERATION
He reasoned that this era has revealed, in stark terms, the pivotal role of international cooperation in responding to extant global challenges.
The rebuilding of economies and the strengthening of public health systems, within the group, will depend, in large part, on their ability to work together towards developing and distributing COVID-19 vaccines as a global public good, he said.

According to a report from the BBC, hopes are rising that an effective vaccine against COVID-19 will be available within the next year.
The report states that preliminary findings show a vaccine developed by Pfizer and BioNTech can prevent more than 90 per cent of people from getting COVID-19. Meanwhile, results from other advanced trials are expected soon.

It is imperative, therefore, that the international community enhances its support for institutions that are best equipped to foster a collective effort, particularly, the World Health Organisation (WHO).

Since its founding, the Group of 77 has continued to meet – even despite the obvious limitations during the past year – to debate and advocate on behalf of their populations.
And, in addition to addressing concerns related to COVID-19, the group has maintained a single voice in calling for concerted action to combat the deleterious impacts of environmental degradation and climate change.

“We have highlighted the disproportionate and unprecedented effects that a warming planet has had, especially on small island developing states. These states are already grappling with a myriad of socio-economic factors that limit their responsiveness to natural hazards,” said President Ali.
Guyana has made climate action a national priority and it remains committed to working with others to overcome the world’s climate crisis, said the President.
To this end, he reiterated his call for the group to continue to pursue, both through strong advocacy and action, a climate agenda that moves countries and economies toward a low carbon future.

UPHOLD PARIS AGREEMENT
“As a Group, we must also strive to uphold the Paris Agreement and work with all stakeholders, including bilateral partners, to take urgent action to realise the agreement’s ambitions.
“This group continues to call upon all states to prioritise the implementation of the 2030 Agenda for Sustainable Development. We must not waver in our commitment to eradicate poverty in all its forms and dimensions,” said President Ali.

The pursuit of the Sustainable Development Goals (SDGs) will become more critical in the post- COVID-19 era.
Now, more than ever, the economic, social and political advancement of the developing world must be placed atop the global agenda, said Guyana’s Head of State, adding: “It is imperative that new and innovative measures to sustain action on the 2030 agenda are developed, considering the unique challenges faced by developing countries, particularly least developed countries, landlocked developing countries, small-island developing states and countries recovering from conflict.”
The Group of 77 and China has a distinctive role to play in this process through its efforts at deepening South-South Cooperation. Such cooperation has enabled many of the member countries to cope with development-related issues, including the fight against poverty.

The 2030 Agenda also requires countries to take action to “conserve and sustainably use the oceans, seas and marine resources for sustainable development.”
Guyana, during its Chairmanship, prioritised representation of the G77 and China at the Intergovernmental Conference (IGC) to develop an international legally-binding instrument on marine biodiversity in areas beyond national jurisdiction (BBNJ).
For the group, this issue is one of extreme importance because the potential damage to the marine environment from activities in areas beyond national jurisdiction could harm the economies of many developing states.

Oceans and seas face the threats of marine and nutrient pollution and resource depletion all of which are caused primarily by human actions. The sustainable use and protection of oceans and seas must therefore continue to be highlighted.
They are an essential component of the world’s ecosystem and are vital to the development of island and coastal states.

PRESERVATION OF DEMOCRACY
The work of the G77 and China spans the gamut of issues discussed across the various committees of the United Nations (UN) General Assembly. However, the group believes that a critical issue underpinning its ability to confront myriad challenges is that of the preservation of democracy. It is imperative that citizens’ right to participate in the political process is preserved and protected.

“Democracy is essential within states and in relations between states. Democracy, therefore, must become more embedded in multilateral institutions,” said President Ali.
In its efforts to ably represent the billions of people in the developing world, it is vital that the UN, inclusive of the Security Council, becomes more democratic in the manner in which it is constituted and in its decision-making.

The Group of 77 and China will continue to call for reforms to all UN systems, ensuring that the voices of its membership are heard, said President Ali, noting, it is equally important that the unique challenges, faced by member countries are accounted for in the UN’s decision-making process.