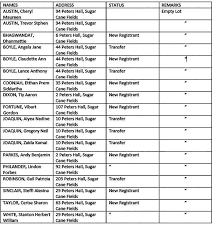 In fact, these individuals, who have been residing in Guyana for years and have registered addresses at Windsor Estate, were publicised in the media and on GECOM’s website as having addresses at “Sugar Cane Fields, Peters Hall, EBD”.
However, at least 19 persons who have been residing at the Windsor Estate community located at Peters Hall, EBD, for almost five years are appalled that GECOM staff have claimed that they cannot locate them.
The residents in Windsor Estate are contending that GECOM has gravely erred in its data recording. Some of these persons, whose names appeared in a letter on Wednesday in a publication by this media house, gathered at one location to refute the publication that they cannot be located.

Hence, that is how come all the residents of Windsor was published under Sugar Cane Fields, Peters Hall. I would like the public to know that all the names that were published under that letter, they are all residents of Windsor and they are living in Windsor,” she explained.
The woman has been living at Windsor Estate for several years and this is the address appearing on her national driver’s licence. However, the pink slip from the House-to-House Registration exercise lists the address inaccurately.

Another resident, Kyle Coonjah stated that he was more than surprised to learn that there were some challenges with the verification of his address by the GECOM.
“It was kind of strange to see my name in the papers and that the lot was listed as empty. However, I can guarantee that it is not empty and the community is pretty developed. There are a lot of houses in here, a few of the people came up to show that they have the same problem here, which is due to the fact that they did not record the data properly.”

Other residents produced their driver’s licences issued to them by the Guyana Revenue Authority (GRA) which clearly state that the addresses recorded are at Windsor Estate, Peters Hall, EBD, and not “Sugar Cane Fields”.
They are calling on GECOM to rectify this situation, where many persons on the Revised Voters’ List are attributed to addresses on empty lots, a number of which are listed on GECOM’s Division 412235B – Sugar Cane Fields, Peters Hall.

The issue arose after the persons could not be located during the most recent verification exercise. During that process, GECOM officers and party scrutinisers conducted verification of only new registrants who had to be added to the Revised Lists of Electors (RLE). When the People’s Progressive Party scrutinisers along with GECOM officers conducted the last round of the verification exercise, the persons whose addresses were listed as “Sugar Cane Fields” were not located. The area is vacant but it was only after a letter writer wrote about it in the media that the residents realised that GECOM has wrong addresses for them.

Since the House-to-House Registration process commenced last year, the PPP had repeatedly cited numerous flaws attributed to the process.