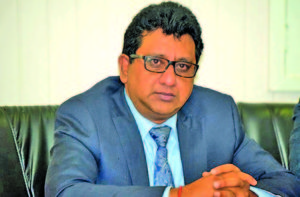 There is a bunch of extremists within the fringes of the PNC who are exploiting a very weakened, egotistical and vulnerable David Granger and are pushing him in a dangerous direction. In the past, both Desmond Hoyte and Robert Corbin successfully managed to neutralize them; some even expelled, others disciplined and sidelined. In one instance, Corbin was forced to publicly label them “wild men” and as a result, the PNC survived. They even managed to win government in 2015. This group is at again.

Hamilton Green who must be about 90 years old, receiving a comfortable Prime Ministerial pension has called upon President David Granger to toss aside the Constitution and the laws and to remain in Government. In other words, he is urging Granger to govern by tyranny and not through the will of the people; to commit a coup and rule by executive edict, not by law and the constitution. Such rule will necessarily see a suspension of the Constitution, including the fundamental rights and freedoms of the citizenry and a hijack of the rule of law. In a word, there will be anarchy in this land!

A small but vociferous contingent in the diaspora, safely in their homes, physically thousands of miles from Guyana, who pay no taxes in this land, is also on this bandwagon, expressing racist and seditious rantings daily. It is suspected that a ‘strongman’ within the Ministry of the Presidency, is goading them on, for he feels that Granger is under the greater influence of his family and that is preventing him from fully boarding this malevolent political train.

I am already on public record calling for the United States State Department to sanction these despots living in the US. I hereby renew this call. They are actively inciting politically and racially inspired disorder in this land from the safe haven of the United States.

A part of the strategy of this group is to stroke Mr Granger’s fragile ego. In so doing, they build up in his head, that the path which they are encouraging him to traverse will achieve for him, not only self-greatness but will also “deliver his people to the promised land”. The sanctimonious persona that he is, Granger is imbibing the kool-aid, hence his current intransigence.

What Mr Granger needs to understand is that it is he who is on national and international trial, not them. History may not even footnote the existence of these radical elements, let alone record their diabolical schemes. As a historian, Mr Granger should understand that his legacy will be the only footprint by which he will be judged by future generations.

What I know Mr Granger may personally endure, would be the ignominy of international alienation and the punitive regime of sanctions which he will attract for his family and his people. Those very ones who are encouraging him now, will avoid him like a plague then, as they will not wish what he will have to suffer, upon their worst enemy. The other fundamental truth is that the one in the Ministry of the Presidency who is sponsoring these radical acolytes is driven by self-interest more than anything else.

The reality is Mr Granger is precariously poised at the juncture of two roads: one that can lead to possible personal redemption and a future for this country, and one that can lead to complete perdition. Whichever one he chooses, he must be assured that the world will know that he made that choice with eyes wide open.