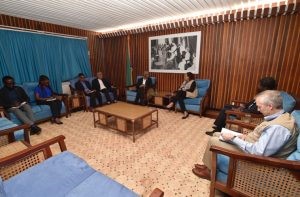 Voicing their concern over “credible allegations of electoral fraud” that they say could influence the results of Monday’s general and regional elections, the heads of the western missions in Guyana yesterday urged President David Granger against a potentially unconstitutional transition of government.

They expressed “deep concern over credible allegations of electoral fraud which may influence the results of this election.”

Against this background, they called on all to ensure “proper procedures are in place to yield a credible election result,” while saying that a fair and free process is vital for the maintenance and reinforcement of democracy in Guyana.

“We call on President Granger to avoid a transition of government which we believe would be unconstitutional as it would be based on a vote tabulation process that lacked credibility and transparency,” they added.

The statement came one day after they questioned the questioned the credibility of the results released by the Guyana Elections Commission (GECOM) for Region Four without the completion of a full count of the votes and also met with Granger.

The unverified results, which have been rejected by seven of the nine parties which contested Monday’s elections, suggest a possible win for the incumbent APNU+AFC coalition, which is led by Granger.

As a result, the missions urged that GECOM and all relevant stakeholders complete the tabulation based on Statements of Poll (SOPs).

The Ministry of the Presidency on Thursday evening said Granger had briefed the diplomats during a meeting, where he told them that at every step of the electoral process he has complied with the laws of Guyana.

According to a post on the ministry’s Facebook page, the president said Monday’s polls were orderly and were in full compliance with the law.

“President Granger assured that at no time did he feel [GECOM] was incapable of conducting fair elections. He reminded that it is not the role of the executive to interfere in the work of the Commission,” it added.

The United States, United Kingdom and Canada missions are among the local observer groups that were accredited by GECOM for the polls.

In a separate statement on Thursday, the European Union, which also fielded a large electoral observer mission, noted that the Region Four Returning Officer declared results “before the legally required tabulation process was completed” and urged that GECOM resume the tabulation of results for the region in compliance with the law.