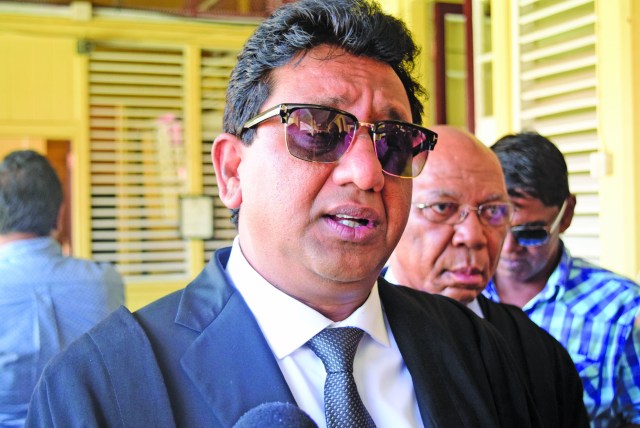 Following yesterday’s ruling by High Court Judge, Franklyn Holder, that he has jurisdiction to hear the case brought by A Partnership for National Unity, Alliance for Change (APNU+AFC) Candidate Ulita Moore seeking to block the recount of votes cast in the recent national elections, Attorney Anil Nandlall has indicated that the PPP intends to go to “the very end” to prove its case.

Guyana continues to be in gridlock regarding the results of the March 2 General and Regional Elections. Caretaker President David Granger had signed a Caricom Initiative after he and Opposition Leader Bharrat Jagdeo had agreed for the regional body to supervise a national recount of the votes.

However, one of Granger’s own candidates, Ulita Moore, subsequently moved to the High Court, and was granted an injunction by Justice Holder, seeking to block the recount.

However, Nandlall is insisting that the case must be heard by way of an elections petition and has since said that a team of attorneys have already begun working on an appeal, and if needs be, will go all the way to the Caribbean Court of Justice (CCJ) to prove their case.

“We have signaled an intention to appeal that decision because we believe that the learned Judge fell into error and we will pursue our appeal to the very end,” Nandlall said.

According to Nandlall, the laws are clear in that all decisions of the Commission can be challenged by an elections petition.

Justice Holder also refused the application for the Court to order the Guyana Elections Commission (GECOM) to produce the Statements of Poll (SOPs) used to tabulate the controversial results for District Four.

In refusing to have the SOPs tendered as evidence, Nandlall related that the substantive matter is still there in Ulita Moore’s case.

GECOM’s Attorney, Neil Boston in a brief comment reminded that Jagdeo’s application challenges the validity of the final result declared by RO, Clairmont Mingo, on the basis it was fraudulent.

He was adamant however, that “if Mr Jagdeo’s issue is a question of fraud then he is saying that the election was not lawfully conducted and under article 163 of the constitution, it says anything that has to do with whether an election has been lawfully conducted or the result of an election has been affected by some unlawful act or omission then it has to go to a special court and you go to that court by elections petition.”

The international community, international and local observers and all other political parties that contested the elections, have said the Region 4 results were highly questionable and have supported efforts to have a transparent recount.