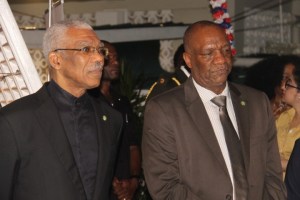 THE ruling coalition will not buckle under pressure, General Secretary of the A Partnership for National Unity (APNU), Joseph Harmon, made clear on Thursday, amid increasing calls for President David Granger to concede.

To heap pressure on the A Partnership for National Unity + Alliance For Change (APNU+AFC) Coalition, the US Government, on Wednesday, announced the revocation of US visas, notwithstanding the fact that the Guyana Elections Commission (GECOM) has not declared the results of the General and Regional Elections held last March.
Iterating that the electoral process is still ongoing, Harmon, as he marked the 9th Anniversary of the APNU, said the partnership supports the Coalition’s position that the “calls to concede in the circumstance from whatever source it comes are prematurely a coercive ploy, a violation of our constitution and laws.”

“We will not bend,” he said in an address to the country. Harmon said notwithstanding the fact that three Election Reports submitted by the Chief Elections Officer, Keith Lowenfield, to the Elections Commission showed a win for the APNU+AFC, the PPP/C and its allies are seeking to use a fraudulent process to unseat the Government.
“The PPP/C and its backers, mostly the backers, are seeking to rely on a partial report of a fraudulent recount process to coerce the Chairman of GECOM to make a declaration in their favour. And may I dare say the timing of their recent action seems aimed at exhorting undue influence on the judge who has to deal with this matter in the High Court,” the APNU General Secretary said.

Today (July 17), the Chief Justice (ag), Roxane George-Wiltshire, will hear arguments in the Misenga Jones Case, challenging GECOM’s failure to declare the results of the General and Regional Elections in accordance with the advice of the Chief Elections Officer. The sanctions announced by the US were made public the very day the court sat to facilitate a Case Management Conference.

The Misenga Jones Case, in part, is premised on the ruling of the Caribbean Court of Justice (CCJ) in the case – Eslyn David vs. Guyana Elections Commission (GECOM) et al – in which it set aside the decision of the Court of Appeal and invalidated the June 23 Elections Report of the Chief Elections Officer. That report was the second of three reports.

Harmon said the CCJ, in its July 8th judgment, while acknowledging the aim of the recount Order No. 60, noted that the Order ought not to contradict the Constitution of the Co-operative Republic of Guyana.

According to him, the CCJ’s ruling meant that the recount order created a new electoral regime and as such, was not in keeping with the Constitution of Guyana.
“This has meant, also, that votes tabulated during the National Recount cannot be used to declare the results of the General and Regional elections,” he posited while pointing to paragraph 37 of the court’s judgment.

That paragraph reads: “The Presidential Candidate on the list for which more votes have been cast than any other list is deemed to be elected as President and the Chairman of GECOM must declare. The allocations of seats in the National Assembly and the identification of the successful Presidential Candidate are determined on the sole basis of votes counted and information furnished by returning officers under the Representation of the People Act.”

Notably, the first and third Election Reports compiled and submitted by the Chief Elections Officer were done on the basis of the declarations made by the Returning Officers in the 10 Electoral Districts.

“The CCJ’s ruling clearly invalidated the recount process indicating that the Chairman of the Guyana Elections Commission was obliged to act in full accordance with the Constitution of Guyana and the judgement of the CCJ and declare the elections results based on the report presented by the Chief Elections Officer,” Harmon stressed.
He said the records, from all indications, show that the APNU+AFC won the March 2 Elections. Given the continuous threats of sanctions, Harmon expressed the view that the elections now seem to be no longer about the Guyanese people, but about other interests.

“And to this, APNU iterate that Guyana is an independent and sovereign state and respect and cherish our relations at a diplomatic level with all states. We stand firm against any threats or actions which are aimed at violating the trust which exist between our leadership and our people. We will, with patient restraint, await the lawful outcome of our electoral process,” he said.

Reciting the National Pledge, Harmon, on behalf of the APNU and by extension the coalition, vowed to stand firm in the interest of the Guyanese people. “Our cause is just and we are confident in the victory of good over evil,” he said.