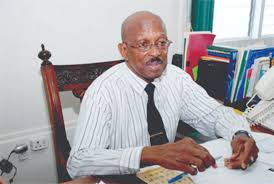 This letter is being dictated in the midst of uncertainty as we await the results of our 2020 Elections.
It is also written as we approach the proverbial ‘Ides of March.’
This was a time in the Roman calendar that the Mighty Julius Caesar ignored warnings to stay indoors. He ventured out and this led to a well-known tragedy in history.

I liken our political leaders to the Mighty Caesar and this open letter is an appeal for them to stay indoors, avoid provocative language and instead seek enlightenment through prayers and fasting.
I was around for the entire week and spoke with people of every race, age and creed.
Without exception, they are all anxious for a settlement so that they can get on with their lives.
In other words, an appeal to our leaders, to ‘MEND, NOT REND.’

Our leaders ought to be reminded that a consistent feature observable in every continent has been an attitude of arrogance and stubbornness by political parties.
Their policies, not consistent with their immediate and long-term interest.
One author observed “Mankind it seems, makes a poorer performance of government than an almost any other human activity.”

With all information available to leaders, in and out of office, we can properly quote the old folks who say “common sense is not so common.”
If our leaders representing our social and political divide wish to honour our Amerindian brothers and sisters, the slaves who suffered the worst form of brutality in modern history and indentured labourers who were exploited by the plantocracy we must demand our leaders who purport to speak for these descendants to sit and talk and no matter how long it takes to find a modus vivendi.

Our young and old, leaders and those led must know that history has a puckish way of repeating itself.
We need to have the good sense to learn from the horrors of earlier experiences.
A few days ago, we note painfully, the attack on innocent school children in a bus.
This month marks the anniversary of a similar occurrence when activists of a certain political party threw a bomb in a school bus on the lower East Coast Demerara, which killed little Godfrey Teixeira, injuring the D’aguiars’, Pierres’ and the Dodds’ children.

This attack on the school bus caused much outrage.
History must tell them that well-meaning as outsiders may be, if we are to make our Golden Arrowhead meaningful, these outsiders or Observers, or what have you can do little to be a real bridge over troubled water because they do not know all of our history.
I noticed the battalion of Observers, some who don’t understand our culture and the tricks of the trade feel duty bound to speak.

We have the five CARICOM Heads of Government who arrived on Wednesday afternoon; as a courtesy we must welcome them.
It is not the first effort by CARICOM Leaders to try to calm the troubled water of Guyana.
In the 1960s, the late Prime Minister of Trinidad & Tobago Dr. Eric Williams hosted separate meetings with the leadership of the United Force, People’s Progressive Party and the People’s National Congress.
As a member of the PNC Delegation, we all returned home empty-handed. No one was willing to budge.
When a similar situation occurred during an Independence Conference in London, one of our Leaders invited the Representative of Her Gracious Majesty Government in England to break the deadlock stating that he had ‘great faith and confidence in the British sense of fair play and justice.’

When the British made the recommendations, not pleasing to one side, all hell broke loose in Guyana.
Lesson – Outside forces may help but ultimately, we must navigate through the storms and tempest.
Let us learn to mend, not rend.
It is a sad reflection on us as a Nation that we seem unable to learn from our own history and that of others.
I listened with amusement and amazement when we are threatened by local representatives of big nations and their Guyanese surrogates and un-emancipated political and business leaders.
The great Nations, whether it be Russia, US, China, UK or European, their interest have always been with the wider geo-political landscape.

It is this policy which explains interventions in the Philippines, the Far East, Vietnam and nearer home, Grenada.
The key to unlock the door to progress and prosperity is in the hands of our local leaders and no one else.
We do not need partisan politics, but a movement to release the creative energies of all the people of the Cooperative Republic of Guyana, so that for example when we discuss the development of our resources, the global giants of industry must know that they are bargaining on behalf of one hundred (100%) of Guyanese.
We mend and not rend.