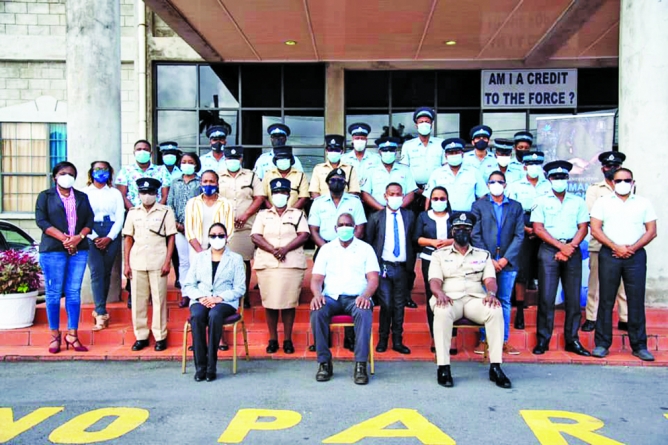 Home Affairs Minister, Robeson Benn has called on prosecutors to aim for the best results when handling Trafficking in Persons (TIP) cases, by maintaining integrity and ensuring that all avenues are explored.

Speaking during a special training exercise for prosecutors in the area of trafficking, the Minister recognised that the COVID-19 pandemic has resulted in lower statistics as it relates to the prosecution of traffickers. However, he mentioned that officials must carry on with their duties after taking proper safety precautions.

“I have taken the position that we cannot suspend our activities in the field, in the courts, in respect to Police activities in all our issues. We have to take action, due regard to personal safety and in respect to the pandemic…There is a multifaceted knowledge base here which can impact how we approach this problem of people trafficking. We have a good base to start from…We have to be at a locus where entity, integrity are rolled into one where we get the best results,” the Minister noted.

Speaking on the issue of trafficking in Guyana, Benn expressed that it forms part and parcel of other illegal activities, spanning not just in the hinterland anymore. He recognised that Guyana is constantly cited as a trafficking ground for persons coming from Cuba, Haiti, and the Dominical Republic as well as refugee activity from Venezuela. In this regard, close attention is paramount.

“Coming out of the experiences and observations made over the years in the interior area with this problem and even now in the urban areas, there is extreme anxiety with respect to this problem and the fact that it enmeshes with all other serious activities that occur in the country… Even now, we’re being threatened with respect to thousands of Cubans in the neighbouring republic of Suriname, who said they’re forming a caravan, will come through Guyana and move on to the Mexican border.”

In the US State Department’s report, Guyana maintained its Tier One ranking for compliance with the standards outlined in the Trafficking Victims Protection Act (TVPA) of 2000. Tier One countries are those whose Governments fully comply with the TVPA’s minimum standards. But Benn shared some areas which were flagged in the document, stating that these are areas for improvement.

“We did achieve the Tier One status from the US State Department. It indicates that we just made it in getting to the Tier One status, where they said we had demonstrated serious sustained efforts during the reporting period. But then they flagged a number of ongoing issues. Although the Government meets the minimum standards, it investigated and prosecuted fewer suspected traffickers, identified fewer victims of trafficking and did not provide adequate screening and shelter for victims,” he shared.

During a similar training this week for Police ranks, Acting Police Commissioner Nigel Hoppie revealed that foreign nationals have predominantly found themselves in exploitative sex and labour situations in Guyana. In analysing statistics from 2018 to present, he said there were 632 suspected victims of human trafficking, of which foreign nationals accounted for 579. According to him, these persons are nationals of Brazil, Cuba, Jamaica, the Dominican Republic, Trinidad and Tobago, and Haiti.

This, he noted, shows that Guyana has a pull factor; that is, an attractive reason to come here. He said it also indicates that persons being exploited are diverse in nationality and demographics. For the reporting period, 84 reports were accepted, which has led to 58 court cases and only six convictions, he disclosed.
There are still cases pending before the courts. Nevertheless, he said that these numbers show that a considerable amount of work is being done by local and international stakeholders to win the fight against human trafficking, which has resulted in Guyana sustaining its Tier One ranking.