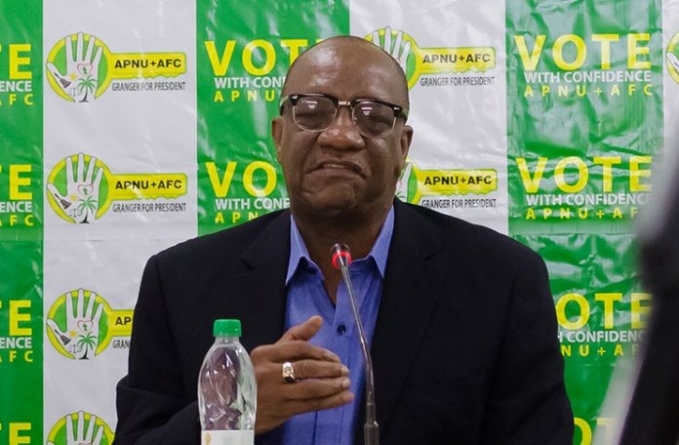 The incumbent A Partnership for National Unity and Alliance For Change (APNU+AFC) Coalition has said that it respects the independence and authority of the Guyana Elections Commission (GECOM), and while some stakeholders might want to “interfere” in the work of the commission, the coalition has always taken the position not to do so.

This was according to Co-Chair of the APNU+AFC campaign, Joseph Harmon, during a press briefing at the coalition’s headquarters, on Saturday.

It was reported that after more than a week of confrontations and legal actions, the votes for District Four were finally declared by the district’s Returning Officer (RO), Clairmont Mingo, on Friday night, amid heavy police presence at the GECOM High Street, Kingston Headquarters.

According to his declarations, in the General Elections, the APNU+AFC Coalition secured 136, 057 votes in District Four (Demerara-Mahaica), while the PPP/C raked in 77, 231 votes. A New United Guyana (ANUG) secured the third largest number of votes with 1,387 votes, followed by Change Guyana with 919 votes; Liberty and Justice Party (LJP) with 761 votes and The Citizenship Initiative, 463 votes. The People’s Republic Party got 389 votes and The New Movement (TNM) 128 votes, while the United Republican Party only managed to rake in 90 votes.

“We meet at the conclusion of the count for the votes cast for Region Four. This, being the final of 10 declarations, shows that the APNU+AFC has a substantial lead but we await the final declaration by the CEO (Chief Elections Officer). We trust that the next steps can be completed in a timely manner so the country can return to normalcy and the march to progress can continue,” said Harmon.

He believes that there should be no winners and losers after an election, in determining the way forward for Guyana. And, in this regard, the coalition maintained that the management of the electoral process was the sole responsibility of GECOM, since no one else has that statutory responsibility. “We also recognise the independence and authority of the court and respect its rulings. While some want to seek to intervene and interfere in the work of those independent bodies (GECOM and the court), APNU has always taken the position not to do so.

“As such we call on all Guyanese to respect the declarations of the elections commission and let us move the country forward in peace, love and unity,” said Harmon.

Despite the declarations of results, there have been questions about the electoral process from international organisations/ambassadors, observers and other stakeholders.

When asked about this, Harmon responded by saying: “Not one single finger has been pointed to the President or the coalition with respect to fraud…On the other hand we have evidence of acts of violence, intimidation on the part of the other party and we have asked that the law enforcement agencies deal with this.” He, as such, challenged persons to put forward a credible case which would prove the coalition’s involvement in acts of fraud. The co-chair said the coalition has “clean hands in this matter,” and has only been involved in running an efficient campaign which mobilised a large scale of Guyanese.