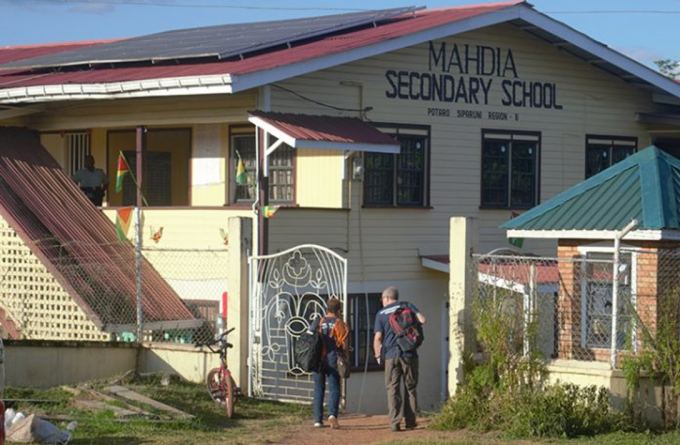 Polls in the Region Eight district of Madhia closed promptly at 18:00 hrs, dropping the curtain on a smooth day of voting.

Voting at the Mahdia primary and secondary schools as well as the Campbell Town polling station got off to an early start with most of the voting done before 10:00hrs.
Reginald Sinclair, a teacher in the town said “The process went very smooth for me. I went out early and cast my ballot.”

“The process went quite smooth, everything is going well so far. It is a little slow but the process has been good,” said Feroz Mootoo, another resident.
“Everything went well for me. I went straight to the lady who actually types in your names so you know which division you are supposed to vote in. I went there first and then she gave me the direct polling station where I needed to vote and I went there,” Hycenth Joseph told Guyana Chronicle.

Mootoo was more specific, saying: “I would like to see good health facilities, schooling education wise and other things that will benefit the community.”

He recounted a recent situation where an aircraft could not get into the community fast enough to medically evacuate a patient. The patient died. To this end, he recommended better healthcare and a plane on standby for medical emergencies in the community.

He added,“Last election, we asked for good roads and we got that but we would like to see a continuation of more roads like the roads to the small streets, those are not completed as yet. We would like to have more voters’ education for the elderly because there are some elderly persons because although they have voted already, they still don’t understand how to vote, some of them forgot”.

“We also need night classes for big persons between the ages of 35 to 50. We need that here in Madhia because there are a lot of people here who don’t understand the simple stuff,” Mootoo pointed out.

INTERNATIONAL OBSERVERS
The international observers also oversaw the voting process.
Two observers from the Carter Centre and another two from the European Union (EU) travelled to various sections of the town to observe the voting process.
Italian national, Lorenzo Scirocco and French national, Pascale Le Hel, who represented the EU, spoke to Guyana Chronicle.

“So far we observed some polling stations in Madhia and the surrounding regions. We are not authorised to refer any problems or troubles because any kind of observations we have will be reported by our team in Georgetown,” Scirocco said.
Le Hel added: “We are just here to observe and there will be a press conference next Wednesday in Georgetown.”

Returning Officer (RO) for the region, Dwayne Marco, said the process went smoothly.
At the close of polls, he commented: “So far it has been smooth even in District Number Two which is Madhia and District Number One which is Paramakatoi area. There were no major reports coming into us and we handled everything well.”

POLICE ‘HAPPY’
All in all when the sun set on the quiet Election Day in Madhia, the police were happy.
Superintendent Ashram, the Commander of the Division said he was pleased with the process, noting that it went smoothly and quietly.
Superintendent Wray, who was also assisting on the ground, echoed similar sentiments as his colleague.

“There were no reports of anything going badly or any issue regarding any challenges persons are facing,” he told this publication.
Some 7,210 persons are registered to vote in Region Eight, the least compared to the other nine administrative regions.

A total of 660,998 persons are registered to vote in these elections at 2,339 polling stations across the country.