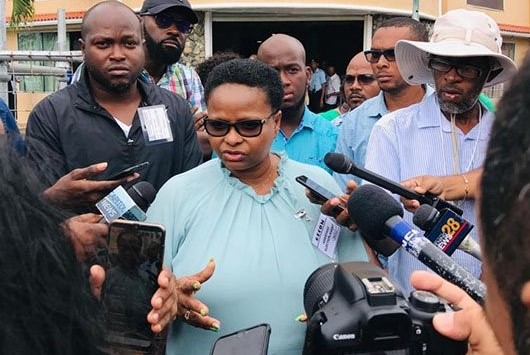 The confrontation lasted for approximately 15 minutes.

The PPP/C representatives and representatives of the newer parties all spoke out against the Returning Officer’s decision to attempt to declare the results although an agreed verification process had not yet been completed.

The entire episode took place in front of international observers and members of the diplomatic corps, who were present.

Lawrence, who is also the Minister of Public Health and Chairperson of the People’s National Congress Reform, which is the largest member of the APNU arm of the coalition, noted that Mingo, at the start of the day’s activities, spoke with party representatives inside the tabulation centre. During the encounter, he informed that he was still unwell and while he was discharged from the hospital on Wednesday, he had returned to work and was in his office working with his staff.

According to Lawrence, after he finished his address, he mentioned that he would be declaring the results and it was at this point where the commotion ensued and he was verbally abused. Party representatives, however, immediately objected to his decision and voiced their outrage at his intention to proceed without a verification.

He left the room and while returning to his office he was followed by PPP/C representatives and others. Lawrence said while Mingo was bombarded with questions, she followed to see what was unfolding.

“The PPP followed him and verbally abused him. I walked behind them to see what was happening. By time I go out, he wasn’t there. I guess he went upstairs and there were PPP people `busing’,” she said.

She added that as she was standing on the stairs she was accused by a young man who was with the PPP/C, of being a part of “whatever are their claims were to GECOM… and he started pushing his hand in my face and said ‘You! You! You!’… I said don’t call my name in your mouth. I was here all week. I said nothing to y’all….”

“Who tell me to say so. Two other young ladies with them were coming and I thought they were coming to knock me so I had to defend myself and so they abuse me verbally and I told them they were murderers. They murder (so many people in Region Four), if they think people forgot that. So all this claim about Region Four love them, I don’t know if they forget about that, so we had a back and forth,” Lawrence explained.