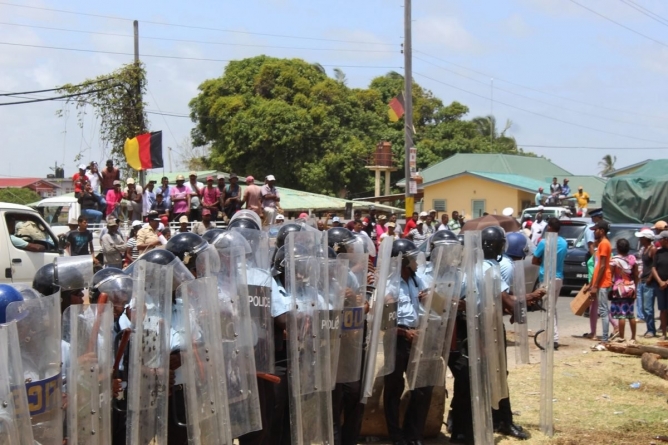 Minister of Public Security Khemraj Ramjattan yesterday defended the actions of the police during Friday’s protests across the country, while noting that the use of “minimum force” was necessary given the circumstances.

“The police had to respond the way they did, minimum force….. These are very difficult times,” Ramjattan yesterday told Sunday Stabroek.

In a comment to Sunday Stabroek, Ramjattan explained that while he is concerned about the country’s present situation, he is pleased that the police were not confrontational.

“…I am concerned, very much concerned, about what happened. We do not want, you know, police in the circumstances…..and I am glad and I am very happy that the police did not try to be confrontational. As a matter of fact, the police did what I thought was right by even backing off and because of the policy that I have of not wanting to confront in a very forceful manner,” he said.

Ramjattan further related that the adequacy of the police responses in such cases is always going to be a judgment call. However, he noted that had the police not acted the way they did, the situation could have been worse.

He noted that these situations can sometimes escalate and get into race. “…And we do not want a racial war in Guyana,” Ramjattan said.

Scores of persons gathered at various communities across the country on Friday to demonstrate against what they claimed was the “rigging” of Monday’s elections.

Protests were held at several West Coast Berbice villages, at Mon Repos and Lusignan on the East coast of Demerara and also in regions Two, Three and Six.

Both the PPP/C and APNU+AFC have claimed victory following Monday’s general and regional elections though the Guyana Elections Commission (GECOM) has yet to officially declare a victor.

There are concerns regarding the verification of the Region Four votes and the PPP/C has moved to the High Court for a resolution.

Among some of the other major issues raised by the protesters was GECOM’s actions during the electoral process and their main request was for a verification of the votes for Region Four and an official release of the results.

The residents had said they were protesting GECOM’s Region Four Returning Officer Clairmont Mingo’s declaration of unverified regional results from Monday’s polls. His declaration showed the APNU+AFC coalition in the lead.

International observers have also called for a verification of the votes to be done in accordance with the law.

Violence unfolded in some instances where persons were attacked and injured. One teenager; Sewdat Hansraj of Cotton Tree Village WCB was fatally shot while another, Annuradha Sukra was critically injured along with three police officers.

A bus transporting schoolchildren was attacked, police were even stoned and residents of Mon Repos was shot with pellets. The police also used tear gas to control the violent protest at Mon Repos.