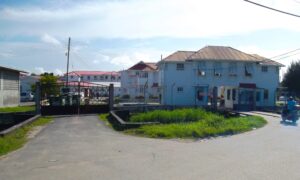 The government is set to commence works estimated at US$17.5 million on three regional hospitals next year. The regional hospitals to be upgraded are the Suddie Hospital in Region Two, the West Demerara Regional Hospital in Region Three and the Bartica Regional Hospital in Region Seven.
This was disclosed by the Ministry of Health’s spokesman, Daniel Singh, on Friday, who said that the US$17.5 million was given to Guyana through a line of credit by the Export-Import (EXIM) Bank of India.
The line of credit was inked by former Minister of Finance, Winston Jordan and an EXIM Bank representative Sailesh Prashad in July 2017. Guyana was given 20 years to repay the loan at an interest rate of 1.75 per cent per annum. A five-year moratorium period was also given, which means that for the five-year period, Guyana will not be required to make any payments.

Despite receiving the line of credit, the previous government did not commence works on the hospitals, however, the new administration decided to revamp the project upon taking office in August.
Kaieteur News understands that the upgrades on each hospital will feature the restructuring and construction of theatres, the implementation of modernized medical equipment, additional beds being provided, as well as stations for nurses.Under the previous government, it was also stated that the upgrades at each hospital would have taken the pressure off the Georgetown Public Hospital Corporation (GPHC). This is because persons from these regions would have access to the same level of health care as those persons at the GPHC, one of the country’s centralized medical facilities.

Minister of Health, Dr. Frank Anthony, recently announced that the Suddie Hospital will cost approximately US$6 million. The Minister shared that he would have engaged with several regional health officials about possible solutions for a number of challenges they are currently facing and the hospital would be fairly new when upgrades are finished. More medical staff will also be deployed and infrastructural projects will take place in different sections of the hospital.

Previous reporting by this publication highlighted that the facility had a nonfunctioning operating theatre, which was a result of sloppy work done by the contractor. Leaks in the roof were also reported in several parts of the hospital and it was stated that the electrical works on the building were done in a poor manner.
Additionally, it was reported that the West Demerara Hospital outpatient facility was in dire need of maintenance, as well as its laboratory, X-ray department and administrative building.