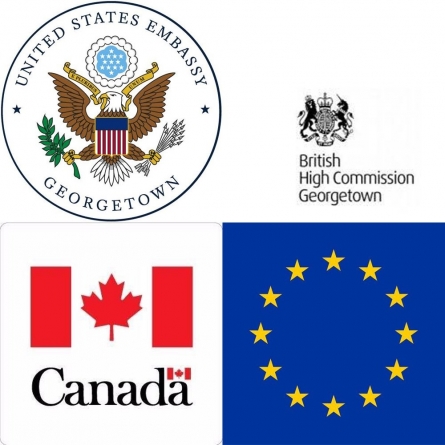 The envoys of the US, UK, Canada and the European Union today called on President David Granger to avoid a transition of government at this point as it would be unconstitutional since it would be based on a vote tabulation process that lacked credibility and transparency.

There have been reports circulating that an attempt would be made to swear in Granger despite concerns that Monday’s elections have been rigged.

The statement by the mission heads follows:

The Heads of Mission of the Embassy of the United States of America, H.E. Sarah-Ann Lynch, the British High Commission, H.E. Greg Quinn, the Canadian High Commission, H.E. Lilian Chatterjee, and the Delegation of the European Union, H.E Fernando Ponz-Canto, express deep concern over credible allegations of electoral fraud which may influence the results of this election.  We call on all to ensure proper procedures are in place to yield a credible election result.  A fair and free process is vital for the maintenance and reinforcement of democracy in Guyana.

We call on President Granger to avoid a transition of government which we believe would be unconstitutional as it would be based on a vote tabulation process that lacked credibility and transparency.