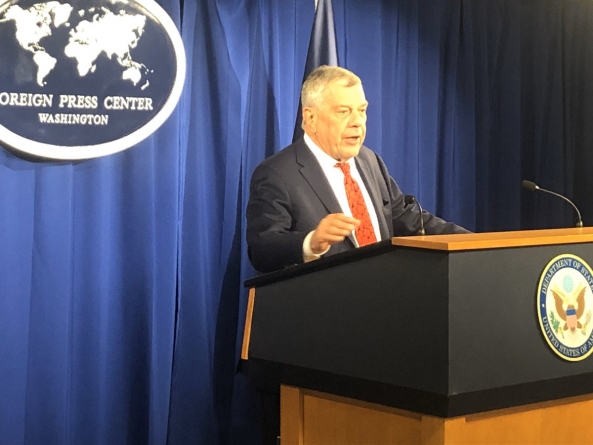 The United States Department of State on Friday warned against any declaration of victory or swearing in as a result of Monday’s polls while questions remain about the credibility of the process.

Acting Assistant Secretary for the United States. Department of State’s Bureau of Western Hemisphere Affairs Michael G. Kozak tweeted, “The people of #Guyana deserve a credible election and legitimate transfer of power; the democracies of the region expect that Guyana will uphold our shared values.”

He earlier noted that the Department of State joined with the Organization of American States   and others regarding the elections. “No candidate should declare victory or be sworn in while serious questions remain about credibility of March 2 elections and whether procedures were followed,” he wrote.

United States Ambassador to Guyana Sarah-Ann Lynch has joined with other western mission heads in questioning the credibility of the unverified results for Region Four, voicing concern over “credible allegations” of electoral fraud and urging President David Granger against transitioning to a new government.

Meanwhile, Members of the United States Congress from both the Democratic and Republic parties also sounded their “deep concern” yesterday about the developments in the days following the polls.

In a joint statement released yesterday, Representatives Albio Sires (D-NJ), Eliot Engel (D-NY), Gregory Meeks (D-NY), Yvette Clarke (D-NY), and Francis Rooney (R-FL) said, “We are deeply concerned about allegations of fraud in Guyana’s elections. International election observers are in agreement that the results released for region 4 could not be verified and were presented yesterday in violation of the established vote tabulation process. We call on the election commission (GECOM) to return to the established procedure and not to declare a winner until a credible vote tabulation process has been completed.”