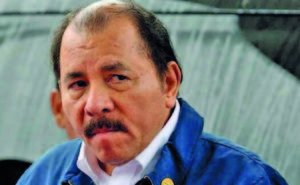 The United States Government on Friday sanctioned a son of Nicaragua President, Daniel Ortega, and Vice President and First Lady, Rosario Murillo, as well as his communications company.

According to ABC News, US Office of Foreign Assets Control added Juan Carlos Ortega to its list of “Specially Designated Nationals.” The designation means his assets in the US are blocked and “U.S. persons are generally prohibited from dealing with them.”
Juan Carlos Ortega is the third son of the ruling couple to be sanctioned by the United States. Some 22 persons close to Ortega and Murillo have been sanctioned, since late 2017.
A known Nicaragua political operator, José Mojica, was also added to the list, ABC News reported.

The US Department of State said these individuals and entities have misappropriated public funds and expropriated private assets for personal gain or political purposes, engaged in corruption related to Government contracts, or bribery.
“Ortega Murillo, the son of President Daniel Ortega and Vice President/First Lady Rosario Murillo, manages a media company, Difuso Comunicaciones S.A., which he uses to stifle independent voices, spread regime propaganda, and defend the Ortegas’ violence and repression. Mojica and Mundo Digital S.A. have long benefitted from corrupt arrangements with the regime, both to enrich themselves and enable regime associates to avoid sanctions,” the US Department of State said.

The US Government said the designations take aim at those aiding the corruption of the Ortega regime.
“The United States will continue to take the necessary steps to support the Nicaraguan people and pressure the Ortega regime to stop repressing the Nicaraguan people, guarantee basic civil liberties, and allow the conditions for free and fair elections to work toward the restoration of democracy in Nicaragua,” the Department of State concluded.
The US said it will continue to pressure Ortega into holding free and fair elections and make the Government respect basic rights.

The US Government took similar action against top Guyana Government and electoral officials on Wednesday over the stalled handing over of power following National Elections on March 2.
The National Recount has shown that the Dr Irfaan Ali-led PPP/C has won the elections with 233,336 votes. But Granger and a few of his top aides, with the help of elements within the electoral machinery, are refusing to give up power.

US Secretary of State, Mike Pompeo announced that visa restrictions have been imposed on persons who are involved in undermining Guyana’s democracy. While those persons impacted have not been named, the visa revocations took immediate effect.
“The Granger Government must respect the results of democratic elections and step aside,” Pompeo had asserted.
As recent as Friday, United Kingdom Foreign Secretary Dominic Raab also disclosed that his country has already started the process of “putting those consequences in place” should the coalition persist in preventing the will of the people from being respected.
Additionally, on Wednesday, Global Affairs Canada demanded a “swift and transparent” conclusion to the electoral process and pledged to hold accountable all those persons who prevent it.