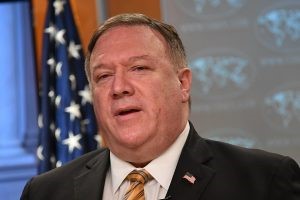 The move taken by United States (US) Secretary of State, Mike Pompeo, to instruct the State Department to take action against individuals who seek to undermine Guyana’s democracy has attracted the full support of US Congressman, Bill Posey. Posey, in a letter yesterday to Pompeo, asked that the State Department do everything within its power to bring about the transition to the new government in Guyana.

Pompeo, just a few days ago at a State press conference noted that it has been four months since Guyana’s March 2, 2020 Elections and the country is due for the “peaceful transition of power.”
He also stated that the Caribbean Community (CARICOM) and the Organization of American States (OAS) have certified the results of the recount, which show that the Opposition won the General and Regional Election with 233,336 valid votes, while the incumbent Coalition attained 217,920 valid votes.
The US Congressman in his letter to the State Secretary said “I fully support your actions to ensure the peaceful transition to the new and duly elected government in Guyana.”

“I ask the State Department to continue to do everything within its power to bring the transition to the new government in Guyana. If I may assist you in any way, please do not hesitate to contact me,” Posey stated.He also noted that he had written twice to de facto President, David Granger, “to urge him to obey the will of his people as expressed in free and fair elections.”

In his second letter to the incumbent President dated July 6, which was seen by this publication, Posey said, “Frustrating the outcome of an election frustrates the will of the people and erodes the reality of democracy.”
Caribbean Community (CARICOM) observers have now confirmed the results of your nation’s March 2nd election. The will of your people is now made evident, and the transition to a duly elected government must now begin.”
The US Congressman urged Granger to declare the results of the election and begin the process of bringing the newly elected government to office. He said “In honouring fair and democratic elections, Guyana can sustain its place in the community of American states.”
Posey pointed out that this will also assure “benefits of democracy and liberty” to Guyanese.

“Democracy and freedom together with a free enterprise economy can become the forces that build a strong nation, grow your economy and promote the wellbeing of every citizen. These are what Thomas Jefferson called the blessings of liberty,” he said in his letter.

In closing, he asked Granger to assure Guyana “the blessings of liberty and immediately provide for the orderly transition to the new and duly elected government.”
With the results of the March 2, 2020 Election confirming a victory for the PPP/C, there have been frequent calls for the incumbent to demit office and concede to his lost.