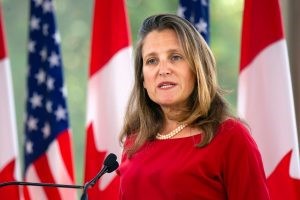 The Governments of the Canada and the United States have been in talks about supporting the democratic transition in Guyana.

This was revealed in a tweet by US Secretary of State, Mike Pompeo, after a meeting he had with the Canadian deputy Prime Minister, Chrystia Freeland.
The discussion also included, according to Pompeo, the importance of the strength of the Organisation of American States (OAS).

The OAS has fielded an observer mission for Guyana’s 2020 elections, and is one of the international observer groups who were threatened by the Minister of Foreign Affairs, Karen Cummings with a revocation of accreditation.
The OAS has called for the tabulation of the election result to be conducted in accordance with all necessary legal, procedural requirements.

Pompeo’s tweet follows public statements by several governments and regional organizations, stating their concern for the integrity of the electoral process in Guyana.
Statements have come from Norway, France, St. Vincent & the Grenadines, CARICOM and others.
The matter of whether the verification of the region four general and regional elections results is a legal necessity is in the Court and will be examined today.