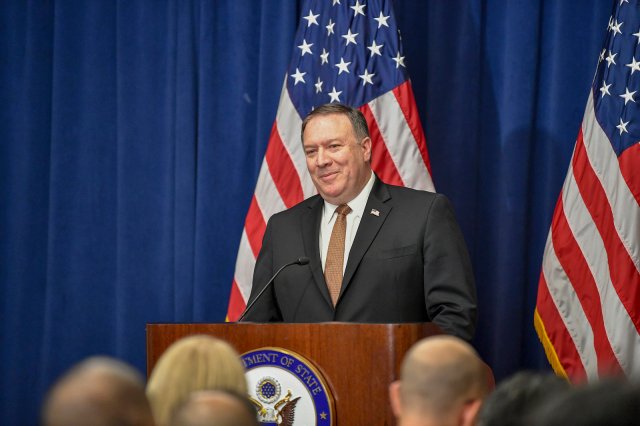 US Secretary of State Mike Pompeo today announced visa restrictions on individuals undermining democracy here and said that the Granger administration must respect the results of democratic elections and step aside.

Pompeo, speaking at the State Department in Washington, said that immediate family members of these individuals could also be affected.

“Today, I am announcing visa restrictions on individuals responsible for or complicit in undermining democracy in Guyana. Immediate family members of such persons may also be subject to restrictions. The Granger Government must respect the result of democratic elections and step aside”, he said.

Pompeo did not provide names but the US government has repeatedly warned that a variety of sanctions could come if the government failed to comply with the tenets of free and fair elections.

Those individuals to be targeted will likely include government officials who have tried to prevent the declaration of the recount result and officials within GECOM who have been actively trying to rig elections in favour of the incumbent APNU+AFC.

Meanwhile, the U.S. Embassy this morning said that it will host a virtual press briefing tomorrow between  11:00 – 11:20 am with U.S. Ambassador to Guyana Sarah-Ann Lynch. It said that  Lynch will discuss the U.S. Government announcement regarding visa restrictions for some individuals responsible for, or complicit in, undermining democracy in Guyana.