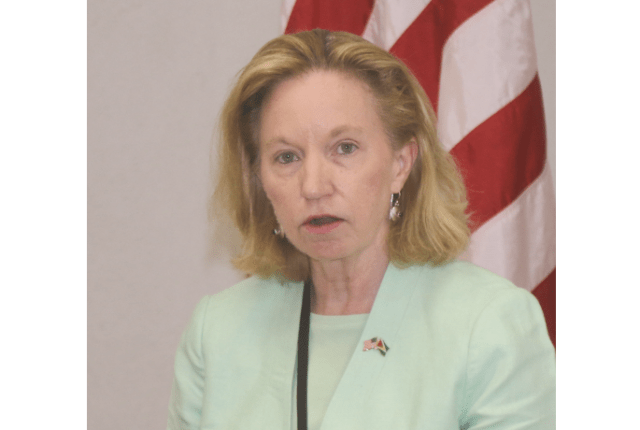 During a virtual press conference this morning, Ambassador Lynch said: “I am shocked and appalled at the dangerous statements and actions that I have seen directed at the Chairwoman”.

As the post elections events continue to unfold, there have been increased attacks – mostly via social media – against the GECOM Chair.

In fact, back in April Justice Singh had reported a death threat on her life to the Guyana Police Force. She subsequently told reporters, “They have a bounty on my head from Friday [April, 17, 2020] night.”

More recently, however, the attacks have escalated and the police on Tuesday arrested an APNU/AFC activist from Linden, Region 10 (Upper Demerara-Berbice) who had threatened to kill the GECOM Chair in a Facebook post on Monday.

The post, which was made under a fake profile and traced back to the person, says, “IF YOU CLAUDETTE SINGH THINK YOU WILL DECLARE FRAUDULENT VOTES SO THAT THE PPP WILL WIN, WELL THINK AGAIN BCUZ YOU AND EVERYBODY IN UR HOUSE WILL F**** DEAD. #DEATHUPONYOU”.

Meanwhile, even more disturbing is a video on social media showing persons conducting a makeshift funeral with a doll which they say is the GECOM Chair.

To this end, the US Ambassador today, called for these acts and attacks against Justice Singh to be condemned.

“I hope that all Guyanese will speak out on her behalf and allow her to continue her work and bring this electoral process to closure…Chairwoman Singh is a person of the utmost integrity and a distinguished jurist, who has given decades of her life in service to her country,” Ambassador Lynch posited.

The GECOM Chair on Wednesday gave an undertaken to the High Court to pause all engagements at the level of the seven-member Elections Commission pending the outcome of the legal proceedings filed by APNU/AFC supporter, Misegna Jones, who is seeking to block the declaration of the March 2 elections based on the national recount results.

This comes after Justice Singh had discarded several reports submitted by Chief Elections Officer, Keith Lowenfield, after he continuously failed to adhere to her directions of using the results from the recount exercise to compile his report.

According to the US Ambassador during today’s virtual press conference, the events unfolding in Guyana since the 2020 polls held more than four months ago are “highly disappointing”. Nevertheless, she noted that the US continues to hope that the will of Guyanese people is respected and further pledged her country’s support to ensure this.