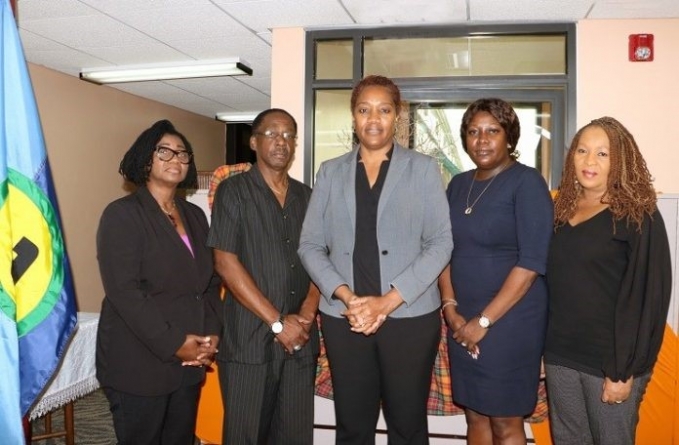 The seven-member Guyana Elections Commission (GECOM) will Sunday afternoon meet to discuss and decide on a national recount of the votes cast at the March 2, 2020 general elections.

News-Talk Radio Guyana/Demerara Waves Online News was told that GECOM Chairperson, Claudette Singh has scheduled the meeting of the commission for 2 pm Sunday.

At least two of the pro-coalition election commissioners met with President David Granger and briefly discussed the involvement of the Caricom team to oversee the national recount of the votes. “There was a quick discussion… There was a kind of a brainstorming session,” an official said of the meeting that was held at State House.

Caricom sources say the team arrived in Guyana Saturday night and is awaiting word from GECOM on when the recount will begin. Police were Sunday escorting several shipping containers of ballots and other material from across the country to GECOM headquarters in Kingston where the recount is expected to be conducted.

The independent high-level team is chaired by the former Attorney-General and Minister of Foreign Affairs of Dominica, Ms Francine Baron, and comprise former Minister of Finance of Grenada, Mr Anthony Boatswain; Senior Lecturer in the Department of Government of the University of the West Indies, Ms Cynthia Barrow-Giles; Chief Electoral Officer of Barbados, Ms Angela Taylor, and Chief Elections Officer of Trinidad and Tobago, Ms Fern Narcis-Scope. They met with Caricom Secretary-General Irwin LaRocque on Sunday morning.

GECOM Chairperson Singh has already committed to a recount with the oversight of the Caricom team. “My commitment has now been bolstered, by a request made by His Excellency President David Granger, and to which the Leader of the Opposition Mr. Bharrat Jagdeo has approved, to have the Chairperson of CARICOM field an independent high level team to supervise the recount of the ballots for District One to District Ten. I welcome this initiative and would assure everyone, that GECOM will cooperate fully with the process,” she said recently.