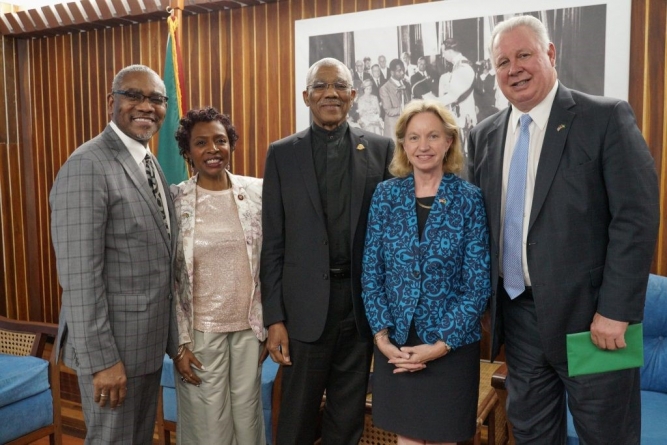 The United States (US) government and several members of the U. S. Congress piled pressure on Guyanese authorities over the questionable declaration of results for Region Four by the Guyana Elections Commission (GECOM).

Acting Assistant Secretary for the U.S. Department of State’s Bureau of Western Hemisphere Affairs, Michael Kozak urged candidates not to declare victory until questions surrounding transparency and credibility of the March 2, 2020 general elections have been settled.

“No candidate should declare victory or be sworn in while serious questions remain about credibility of March 2 elections and whether procedures were followed,” he said on Twitter.

Kozak, in a similar tone to that of a joint statement by the U.S., Canada, Britain and the European Union, hinted at the unconstitutionality of remaining in power without a credible election. “The people of Guyana deserve a credible election and legitimate transfer of power; the democracies of the region expect that Guyana will uphold our shared values,” he said.

Separately, Congressmen Albio Sires, Gregory Meeks, Yvette Clarke, and Francis Rooney said they were deeply concerned about allegations of fraud in Guyana’s election. They called on GECOM not to declare a winner unless the results are properly verified. “We call on the election Commission (GECOM) to return to the established procedure and not to declare a winner until a credible vote tabulation process has been completed,” they said.

The GECOM-declared results show that of the 215,854 valid votes cast in Region Four, David Granger’s A Partnership for National Unity+Alliance For Change (APNU+AFC) won 136,335 votes and the People’s Progressive Party (PPP) won 77,258 votes. But the PPP says its Statements of Poll show that APNU won 114,345 votes and the PPP, 80,344 votes.