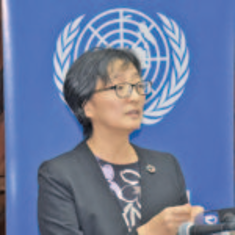 The United Nations (UN) on Friday called on the Guyana Elections Commission (GECOM) to verify the Region Four results of Monday’s general and regional elections in keeping with the law.

“We encourage the relevant Guyanese authorities to finalize the process in a manner which leaves no doubts as to the credibility of the results that reflect the will of the Guyanese people,” the UN said through its office in Guyana.

The United Nations says it is calling on all sides to act with calm, patience and in full respect of human rights, the rule of law and Guyana’s constitutional order.

Expressing concern about the situation in Guyana, the UN says it notes the statements issued by international observers and Ambassadors accredited in Georgetown, the capital.

Those statements raise concerns regarding lack of compliance with national legal procedures and the need to resume the tabulation of results for Region Four.

Meanwhile, A Partnership for National Unity+Alliance For Change (APNU) “urges all Guyanese to respect the will of the people as exercised in the General and Regional Elections of Monday March 2, 2020.”

Further, the coalition said it “commends the hundreds of thousands of Guyanese who exercised their right to vote on Monday and who have remained calm and peaceful as we all await the final declaration of results by the Guyana Elections Commission.”

The GECOM declared results, under legal contention, show that of the 215,854 valid votes cast in Region Four, David Granger’s A Partnership for National Unity+Alliance For Change (APNU+AFC) won 136,335 votes and the People’s Progressive Party (PPP) won 77,258 votes. But the PPP says its Statements of Poll show that APNU won 114,345 votes and the PPP, 80,344 votes.